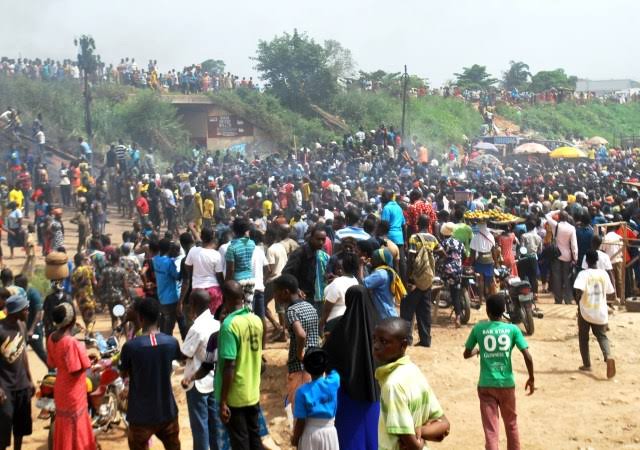 Last week was tough but it was an even tougher weekend.

What should have been a cheesy couple of days used to celebrate Valentine, started off with fights, chaos and oppression.

When news of the reopening of Lekki Toll Gate, Lagos hit the media, #EndSARS campaigners clearly expressed their opposition on social media. To catch you up, the toll gate was one of the meeting points during the height of the #EndSARS protests in 2020.

On October 20, military officials shot at unarmed protesters leading to several deaths and injuries. The circumstances around the bloody incident were murky at the time and several investigations have since been carried out to confirm the shootings. Catch up here.

In opposition to the decision of the Lagos Judicial Panel to reopen the toll gate, Nigerians on social media had planned a peaceful demonstration, tagged #OccupyLekkitollgate. Meanwhile, another set of demonstrators launched a counter-protest under the hashtag, #DefendLagos. This set eventually withdrew.

As soon as the #EndSARS peaceful protesters began to converge, Police officers in Lagos descended on them, detained and beat them.

Officers of the Nigeria Police continued to clampdown on protesters at Lekki tollgate and a Black Maria belonging to the Lekki Concession Company (LCC) filled with protesters left the tollgate plaza.

On Sunday, the arrested activists regained freedom. The police had charged the protesters to the Magistrate Court in Yaba, Lagos State for flouting COVID-19 protocols, we learnt.

They were arraigned on a three-count charge for failing to comply with the COVID-19 protocol prohibiting social gathering, breaching public peace, and raising an unnecessary alarm to the public.

Pleading not guilty, the defendants were granted bail in the sum of N100, 000 each, with sureties in like sum.

Lateef Layeni, the magistrate, ordered the defendants to undergo COVID-19 test after being crammed in a Black Maria vehicle. The case was adjourned till March 2. Read the full report here.

We gathered that the incident followed complaints by an aggrieved farmer who wrote a petition to Amotekun operatives in the area of an invasion of his farm by a herder with his cattle.

The farmer alleged that despite recent announcements by the authorities that open grazing was unlawful, some herdsmen have continued to graze on his farm at Gambari community, destroying his farm produce in the process. Read the full story here.

On the same day, Seyi Makinde, the Governor of Oyo State imposed a dusk-to-dawn curfew after a violent clash left one person dead in Ibadan, the state’s capital.

We gathered that the clash had first erupted on Thursday at Shasha market in Akinyele Local Government Area of Ibadan when a pregnant woman and a cart pusher had a heated argument over waste disposal. Read the full story here.