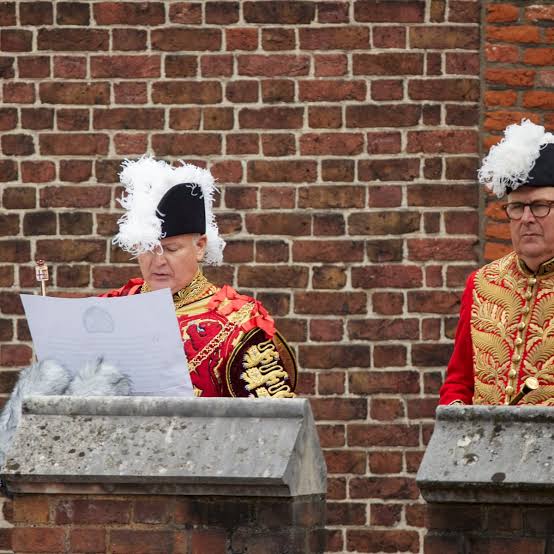 The Duke of Norfolk, otherwise known as Edward Fitzalan-Howard, is Earl Marshal, a position he inherited from his father in 2002. As the most senior peer in Britain, the duke has been given the task of organising Queen Elizabeth II’s state funeral, as well as the coronation of King Charles III.

Since 1936, the Duke of Norfolk has held the position of Earl Marshal. Fitzalan-Howard’s grandfather was responsible for the Queen’s Coronation in 1953 as well as the State funeral of Sir Winston Churchill in 1965, and the investiture of King Charles III as the Prince of Wales, in 1969.

The Fitzalan-Howards are one of the oldest aristocratic families in Britain, with a lineage that can be traced back to Edward the Confessor. The duke currently lives at his ancestral home, Arundel Castle in West Sussex, a palatial pile that overlooks the River Arun and dates back to the 11th century; it has been the seat of the Dukes of Norfolk and their ancestors for over 850 years.

Lady Kinvara Balfour, the duke’s niece, told Tatler: ‘In organising the Queen’s funeral (and the coronation to come), Uncle Eddie has done a truly outstanding job. What a show of elegance, efficiency and rare precision he has produced for our nation, and the world – just like the late Queen Elizabeth II herself did. He is an incredible father of five, a grandfather too, and he runs Arundel Castle with such care and such thought – not only for every brick and every painting, but for the people who help him do so. And he used to be a Formula One driver. He’s a bit of a legend.’

Fitzalan-Howard was educated at Ampleforth College and later studied at Lincoln College, Oxford. The duke’s brother is Lord Gerald Fitzalan-Howard, who resides at the family’s other stately seat, Carlton Towers in North Yorkshire; he and his wife, Emma, both recently starred in ITV series Keeping Up With The Aristocrats. Their sister, Lady Marcia Fitzalan-Howard, is the English actress best known for her performance as Sarah B’Stard in the 1980s satirical comedy The New Statesman.

King Charles III and Camilla, the Queen Consort, are met by the Duke of Norfolk, as they arrive for the State Opening of Parliament, 2015CARL COURT/Getty Images

After a long period of separation, the duke and his former wife Georgina, Duchess of Norfolk, finalised their divorce this year. As the most senior lay member of the Roman Catholic Church it is likely that divorce proved a difficult decision for the duke. The couple share five children, Henry, Earl of Arundel, Lady Rachel, Lord Thomas, Lady Isabel and Lord Philip. During the breakdown of their relationship, the pair reportedly still lived together in their vast medieval castle, although the duke is said to have the east wing and the duchess, the west. Georgia then moved out to a farmhouse just two miles down the road from her former home.

The duke and duchess reportedly declined an invitation to the wedding of the Prince and Princess of Wales due to the announcement of their separation. Both friends of the Queen, it has been reported that Her Majesty was saddened that the couple ‘were unable to mend the marriage’.

The Prince of Wales signs the Proclamation of Accession of King Charles III, 2022KIRSTY O’CONNOR/Getty Images

Their eldest son Henry, who will inherit the dukedom, is currently Managing Director of Noble Insurance Group, although he had a brief stint as a race car driver in his early twenties. From 2006 to 2009 he participated in a number of competitions, including the British Formula 3 Championship, whilst studying economics at Bristol university.

The duke has confirmed he is currently in a relationship with Chica Herbert, mother of socialite Frankie Herbert and ex-wife of Harry Herbert whose father, the 7th Earl of Carnavon, was the Queen’s racing manager and a close friend.

The family has long had connections to the Royal Family. The third Duke of Norfolk was uncle of Anne Boleyn and Catherine Howard, both of whom became wives of King Henry VIII. Most recently, the duke was appointed a Knight Grand Cross of the RVO for services to the monarchy during the Queen’s Jubilee honours this summer.

‘The Woman King’ Is an Original, Black Film with a Female Director, and It’s #1
St George’s Chapel, where Queen #Elizabeth will be buried, lies the remains of a young African boy, Prince Alemayehu son of Emperor Tewodros II of Ethiopia.