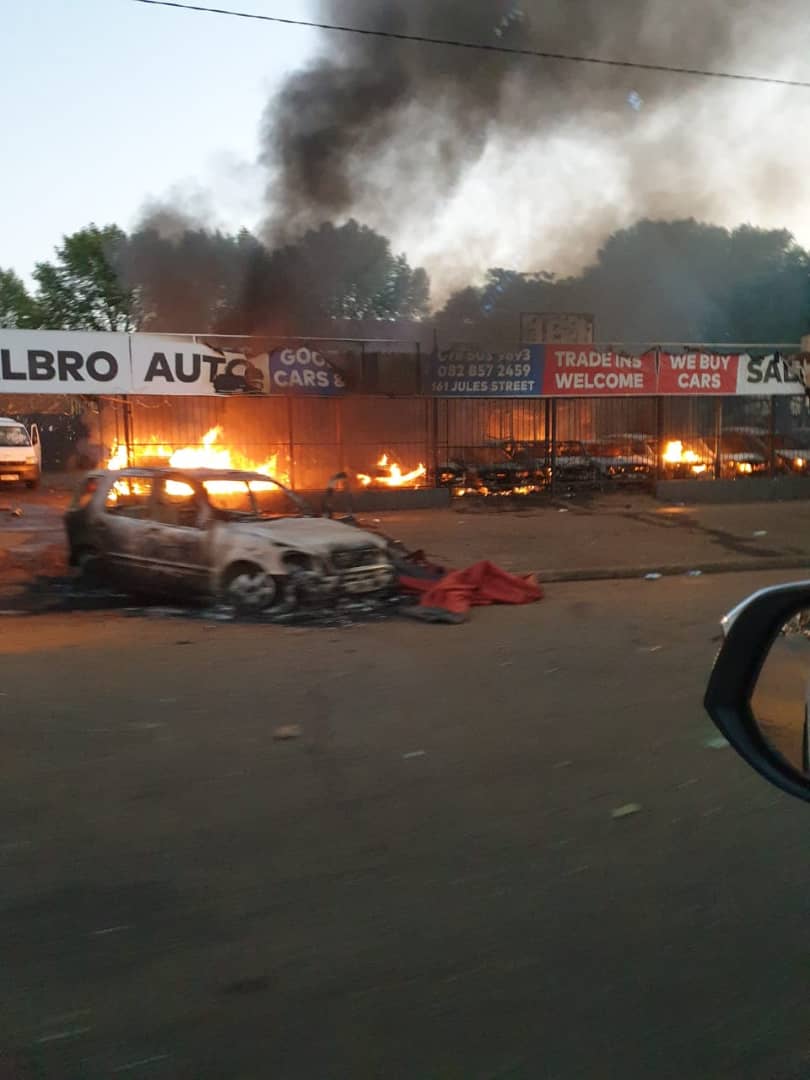 Over the last two weeks, South Africa has been absorbed by yet another series of xenophobic attack, which began in Johannesburg and spread to the capital, Pretoria.

The spate of the attack has seen businesses owned by foreigners (especially Nigerians) brought to a stall as South Africans are asking foreigners to leave their country and looting their shops while setting foreigners ablaze.

The J’oburg riots, which began on Sunday evening in Malvern, have now spread west of Jeppestown to the vicinity of Maritzburg Street.

On Sunday, sources had it that violent looting descended onto Joburg’s inner-city streets, with foreign-owned shops and car dealerships baring the full brunt of the onslaught.

Although the exact cause of the insurgence is yet to be identified, reports suggest that the wave of xenophobia, which washed over Tshwane last week, has now spread to other areas in the province. More than 30 people arrested for involvement in the riots.

Earlier today, a South African bus driver was shot dead last week in what appears to be a drug deal that went bad between him and a Tanzanian.

Speculations also have it that the driver was actually shot accidentally by policemen who were on the scene. South Africans have since then capitalised on the development to unleash terror on foreigners.

Most streets where foreigners hang out in Pretoria are deserted, all shops locked. SA has done well this time around by deploying enough riot police at least 8n Pretoria. But the situation in central Johannesburg is different.

On the other end of the province, in Tshwane, City officials are gearing up for a resurgence in violent protest, following last week’s riots in the CBD, which resulted in a full-scale shutdown of the downtown precinct. It’s alleged that taxi drivers spearheaded the looting and destruction of foreign-owned shops in retaliation for the killing of one of their own, ostensibly, by a Nigerian national.

They felt that a Nigerian shot a South African truck driver, so they killed Nigerians, looted and burned their shops.

Taxi ranks will be shut down to prevent Ethiopians and Nigerians from escaping the CBD.

A task team was deployed to the area late last week and while the situation was brought under control, taxi drivers have vowed to continue their fight back against foreign nationals.

A spate of xenophobic violence, stretching from Soweto, to Joburg, Pretoria and as far as Richard’s Bay, has been condemned by political leaders and human rights organisations.

Reacting to the news, Nigeria’s Minister for Foreign Affair, Geoffrey Onyeama, via his Twitter handle, said that the Federal Government will take definite measures to curb the situation.

“We have received sickening and depressing news of continued burning and looting of Nigerian shops and premises in South Africa by mindless criminal with ineffective Police protection. Enough is enough! We will take definite measures,” he said.