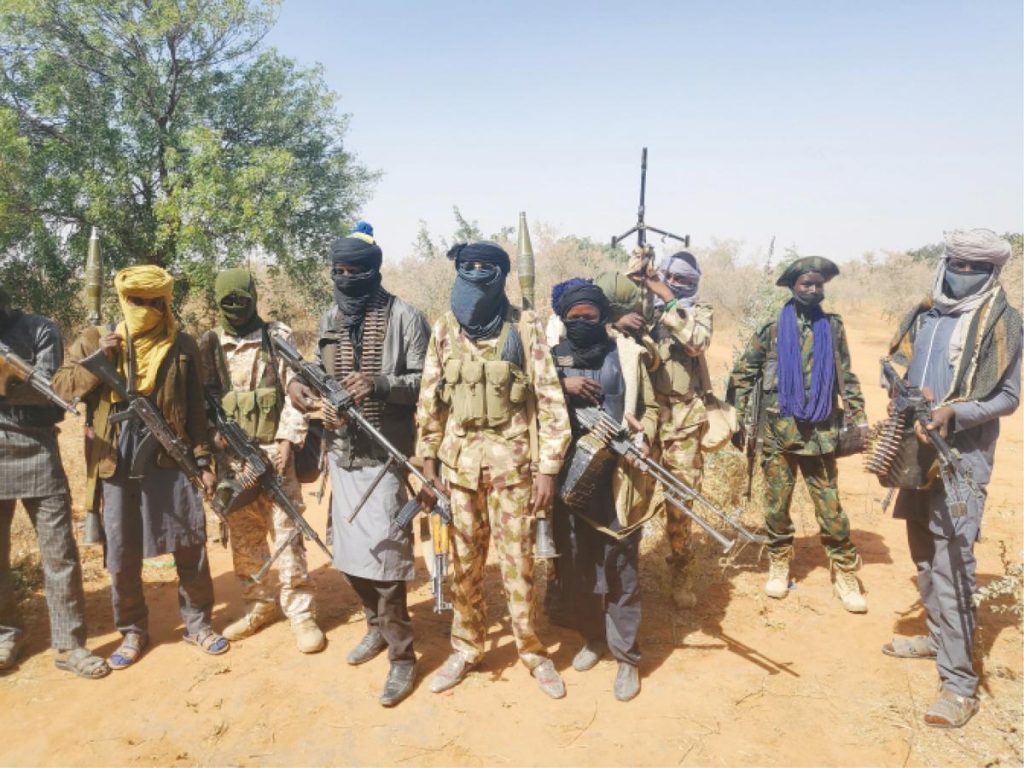 Top security sources, who confided in our correspondents, said security agents in other states had been alerted to be on the lookout for the fleeing bandits.

It was also gathered that the South-West states had put the regional security outfit, Amotekun, on the alert following intelligence reports that bandits being dislodged from Zamfara State were fleeing southwards.

The Amotekun Corps commanders in Ekiti, Ondo, Osun and Oyo states, in separate interviews with our correspondents, stated that residents of the states had been told to be vigilant and guard against infiltration by the fleeing hoodlums.

They said this as gunmen invaded the Kabba Correctional Centre in Kogi State, where they freed 240 inmates and killed two soldiers.

No fewer than four travellers were also abducted in Ekiti State on Monday.

The Federal Government had last week ordered telecommunications companies to shut down their base stations in Zamfara State as part of the onslaught against bandits, who were engaged in ceaseless kidnapping and killings in the state and other parts of the North-West.

The bandits had also been hit by hunger following the decision of the state government and neighbouring states to close regular markets, where they were getting foodstuffs.

There were reports that many bandits had been killed during military raids, while others were said to be fleeing Zamfara State.

A senior police officer said, “A few days ago, some of the bandits fled to Niger State and they were dealt with by the military. Some of them are moving southwards and security agents have been alerted.”

The Corps Commander, Amotekun Corps, Ekiti State, Brig Gen Joe Komolafe (retd.), said in an interview with The PUNCH that the agency had always envisaged that the dislodged bandits would want to take refuge in other states and was proactive about guarding against their incursion into Ekiti.

Komolafe said, “We have always envisaged that when dislodged, they will want to move to other states; that is why each time we come out, we talk to the citizens to report strange faces to us.

“We try as much as possible to monitor the routes and entry points; we know that the criminals may not come by road or through the main routes to enter the state; it is in view of that that we always tell our people to report strange faces to us.

“We patrol the forests; we have people on the farms, who will tell us when they see strange faces on the farms or bushes. We try to plead with the people to give us necessary information about strange faces and unusual movements.

“Also, we have perfect working relationships with Amotekun in the neighbouring states as well all security agencies in the state.”

On his part, the Ondo State Amotekun Corps Commander, Chief Adetunji Adeleye, stated that the security outfit had received a security report on the fleeing bandits.

He said Governor Rotimi Akeredolu had given an order for the corps to put in place necessary security measures in the 18 local government areas of the state to prevent the bandits from striking in the state.

Adeleye stated, “We have got information from a reliable intelligence report that the fleeing bandits are coming, that they intend to stay in the forest to cause mayhem and that they are closing in seriously. The source told us that the bandits want to start with Ondo State as a frontline state.

“So, with that, we have put serious intelligence on the ground across the state and our primary aim is to prevent any infiltration and attack. We don’t even want them to strike before we get them. So, we are at every local government area, every major town and inside the forest.

“On the other side too, we are deploying all means to ensure that if they come to this state, they will meet their waterloo. Right now, our intelligence is on the ground at every nook and cranny of the state. And we are monitoring keenly. That is what Mr Governor has directed me to do and I will do it diligently.”

The Director-General, Amotekun Corps, Oyo State, Col Olayinka Olayanju ( retd),  said the outfit’s personnel were patrolling boundaries of the state aggressively to prevent hoodlums from relocating to the state.

The DG said, “We knew that and our men are already on the lookout for the bandits, other criminals and strange faces, especially at our boundaries.

“We are at alert and our men are carrying out operations regarding this at Irepo, which is the boundary of Oyo and Kwara states, to make sure that the bandits do not relocate to our state.

“They will be stopped. Our men will pick them up. We won’t allow criminals to relocate here.”

On his part, the Corps Commander, Amotekun Corps, Osun State, Brig Gen Bashir Adewinbi (retd.), stated, “They (bandits) can’t come to Osun, because the state does not have ungoverned areas.

“Everywhere is being monitored in Osun State in collaboration with the police and with additional 750 vigilantes recently recruited by the state government to support Amotekun.”

When contacted to comment on reports that the bandits being dislodged from Zamfara State were fleeing to other states, especially southern states, the Director of Defence Information, Major General Benjamin Sawyerr, neither confirmed nor denied the reports.

He said, “Operations are ongoing. Tactics and strategies are not to be divulged at this moment.

“The operations are being conducted in line with the operational directives as well as contingencies.

“The North-Central, North-East and the North-West will soon have reasons to thank the Armed Forces of Nigeria for a job well done.”

He, however, declined to answer further questions put to him on the matter.

As the Amotekun Corps beefed up security in the South-West, gunmen on Monday waylaid travellers on the Ayetoro Ekiti-Otun Ekiti Road and whisked no fewer than four persons into the forest.

Sources said two buses conveying passengers from the Otun Ekiti end of the road were attacked by the gunmen, who abducted four passengers, while the others escaped.

A source said one of those, who escaped, told him that the gunmen took away four passengers from the two buses.

Another source, who said he got information about the attack from hunters, said, “The hunters were called that some kidnappers were operating on the Ayetoro Ekiti-Otun Ekiti Road.

“But before they got there, the gunmen had commandeered the two buses into the bush. At that point, we could not tell the number of people taken into the forest, but the buses were abandoned there.

“I advised the hunters and the security agents, who arrived at the scene later, that the kidnappers would have gone towards Otun and that they could not have gone very far by then.

“Definitely, they were the ones, who operated on the Ayetoro-Ewu Road on Sunday. The Sunday operation was not successful and that was why they waited around to carry out this one.”

According to him, the kidnappers, on realising that they had missed their targets on Sunday, might have resorted to attacking commercial motorcycle riders and shot indiscriminately in the air to scare people off.

“An Okada rider was stopped at gunpoint and the hoodlums took all his valuables, while another Okada operator escaped into the bush. The kidnappers fled when they noticed that the other Okada rider had escaped,” the source added.

The Police Public Relations Officer in Ekiti State, Sunday Abutu, who confirmed the incident, said, “We heard the information and we have deployed our men there.

“There was a kidnap incident this morning (Monday). I cannot yet confirm the number of people abducted. It began on Sunday evening when some suspected robbers attacked a man, whom the police thereafter rescued. But this morning, we learnt that the suspects were the ones who abducted some road users. The police are on their trail.”

Meanwhile, the Peoples Democratic Party in the South-West, on Monday, called on the President, Major General Muhammadu Buhari (retd.), to resign from office following his alleged inability to stem the tide of killings across the country.

The Publicity Secretary, South-West PDP, Chief Sanya Atofarati, who lamented that the killers were now turning the heat on the military and other security agencies, thus leaving the citizens helpless and hopeless, advised the Federal Government to seek foreign help in the interest of peace and development of the country.

“It is gross incompetence on the part of the Buhari-led All Progressives Congress Federal Government that Nigeria has become a graveyard,” he stated.

Atofarati said this in a statement titled, ‘Killing spree: Why Buhari must resign now’, made available to journalists in Ado Ekiti in reaction to recent attacks by bandits and gunmen on military formations as well as police stations and personnel.

He stated, “Between 2015 and now, more than 20,000 Nigerians have lost their lives due to the inability of the government to protect the lives and property of the citizens, ranging from jihadist Fulani herdsmen to Boko Haram to bandits/highway kidnappers.

“It is safe to say that the APC government remains insensitive to the welfare of Nigerians, otherwise, by now, Buhari should have voluntarily resigned or cry for help.

“Nigeria is now a country, where the agencies saddled with the responsibility of securing the citizens have suddenly become weaklings and incapacitated; a country where governors’ convoys are attacked at will, monarchs are kidnapped even under the President’s nose in his home state; a country where there is no war but mass burial weekly!

“It is high time Nigeria sought foreign help to curb insecurity, lest we are all captured.”