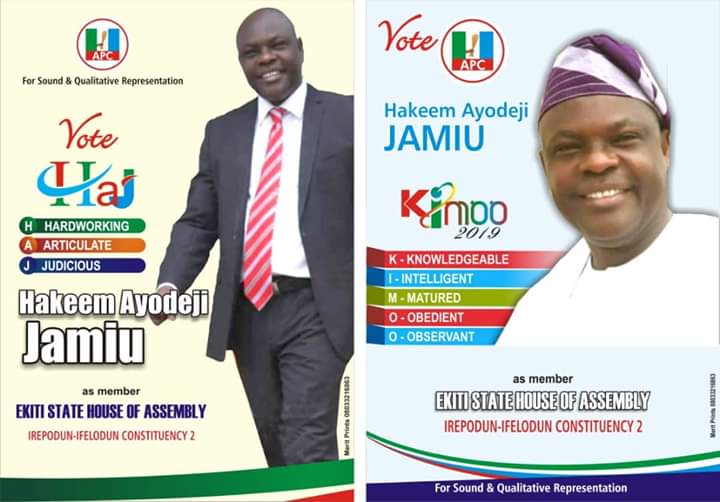 All roads led to Igbemo-Ekiti, the heartland of rice production in Irepodun-Ifelodun Local Government of Ekiti State on Thursday January 3rd 2019, as messages of solidarity poured in for Hakeem Ayodeji Jamiu, who is contesting for the Irepodun/Ifelodun Constituency Two seat in the Ekiti State House of Assembly.

Jamiu, who is a former Senior Special Assistant on Research and Documentation to Governor Kayode Fayemi between 2010 and 2014, had earlier secured the ticket under the platform of the ruling All Progressives Congress (APC) unopposed, in his constituency as a mark of respect for his leadership qualities, including hard work, honesty, loyalty and team spirit in driving the Party’s agenda for success in the July 14, 2018 governorship election that returned Governor Fayemi to power.

A time-conscious bureaucrat and writer, Jamiu last Thursday proved that ‘early to bed is early to rise’ to muster strength for advantage over competitors as he beat the pack of APC candidates to the first place in the February/March general elections campaigns  in what promises to be a hard-fought contest that pits his party for a supremacy battle with the rival People’s Democratic Party (PDP); the party that is struggling for breath after  it was fractured over internal squabbles among gladiators that left PDP in tatters.

Fighting from the position of strength and committed to the ideals of returning good times to Ekiti people after four years of reversal of fortunes for the state by the last administration, Jamiu led the field Thursday with supporters and friends across the state showing up at the Ansarudeen Primary School playground, Igbemo-Ekiti, to join top  leaders of the party who had come in solidarity to give a head-start to a campaign targetted at giving APC advantage in the control of the Parliament in Ekiti State to return power to Ekiti people to better their living standards.

At the event where Erelu Bisi Adeleye-Fayemi was present and also attended by a massive crowd of supporters, no one was left in doubt as to the direction the election is headed in the countdown to the Presidential, National and House of Assembly polls, as the presence of candidates of note in other political parties could not be seen across the local government.

At the event where speeches were made, Hakeem Jamiu himself led the pack, calling voters’ attention to the abysmal conditions under which they were left to wallow to suffer deprivations for four years by the administration of Governor Ayodele Fayose, who happens to come from the same local government and constituency, but did nothing to add value to the living conditions of the residents.

He cited the collapsed bridge between Afao-Ekiti home town of Fayose and Igbemo-Ekiti, which led to traffic pains that travellers endured for four years, among others denials that the people of the local government suffered in the hands of the “son of the soil”.

Jamiu, who announced that Fayemi had awarded contract for the reconstruction of the collapsed bridge,  also praised the governor for restoring the hopes of workers, pensioners and Ekiti people in general, noting in particular that within two months of his administration, workers had received four months pay while electricty had been restored to Ikogosi, Erijiyan and Ipole Iloro communities  which have been in darkness in the last four years!

Speaking on the need to vote for APC in the February and March Presidential elections, Jamiu said:

“Both Federal and state governments are coming with empowerment programmes for women and youths in particular, and so we must seize the opportunity to benefit from the schemes that will take our youths from the streets while our women become active participants in economic and empowerment activities that will add values to the lives of Nigerians and Ekiti people in particular.

“In particular, we must note that a vote for APC is a vote for freedom to secure your future and make a complete departure from the past where commonwealth was shared among a few people in the PDP clique.”

Noting that PDP failed in the last governorship and presidential elections because of the miseries it dispensed to Nigerians and Ekiti State in particular, he said that nothing had changed in the conduct of PDP members to suggest that they present any hope to make Nigeria a great nation.

“Nothing has changed in favour of PDP after the party lost and so it does not constitute a threat to APC to emerge victorious in the general elections in February and March,” he said.

APC Leader, Chief Alaba Abejide, described Jamiu as hard working, honest and competent, noting in particular the competences and hard work he exuded in the Kayode Fayemi Campaign Organisation leading to the party’s success in the July 14 governorship poll.

He urged the residents of the constituency to vote for Jamiu to enable them benefit from his leadership qualities, including his knack for always striving to be good to his people.

Constituency Two Chairman, Olufemi  Olonisola,    spoke in the same vein, saying that Jamiu was a rare son of Igbemo-Ekiti, who always strives to contribute to the development of his community. He urged the people to vote for him and other candidates of the party in the general elections.

Prince Ilesanmi Ogunleye from Awo-Ekiti extolled Fayemi’s virtues, explaining that both Fayemi and Jamiu presented great hopes for the people,as both share common ideals and philosophy to ensure a good standard of living for the people.

He promised to deliver Awo-Ekiti votes for Jamiu, who he said was an old student and first set of Awo Community High School.

Also at the occasion was the APC House of Representatives candidate for Federal Constituency One comprising Ado-Ekiti and Irepodun/Ifelodun local governments, Sola Fatoba, who extolled the virtues of the first family.

He described Jamiu as a worthy leader who enjoyed the support of both party leaders and members. He urged the people to vote for all the candidates of APC in all elections, stressing that APC remained the only party that can salvage the pitiable conditions created by PDP’s poor and corrupt leadership of the country.

Fatoba promised to make Igbemo-Ekiti the hub of rice production in the South West with the provision of tools to make Igbemo rice compete with international standard.

The high point of the event was the speech by Erelu Bisi Adeleye-Fayemi who described Hakeem Jamiu as dependable, responsible,  honest and hard working.

She spoke on the harsh economic condition of Ekiti people under the last administration, which manifested in hunger and want, including distortions in the family production capability to enjoy the fruits of the womb.

She explained: “During our first four years, I was always on hand to receive First Baby of the Year in the State Hospital every January 1, but this year, we waited in vain to receive the usual good news of first birth but none was forthcoming because the delivery wards were empty and so there was no new birth.”

She explained that the harsh economic condition foisted on the people by the last administration had forced them to become unproductive in the reaping of the fruits of the womb.

Adeleye-Fayemi urged the people to vote for APC to end miseries among the populace.

She also urged support for women through empowerment schemes and other activities that can add values to their living conditions while also urging women to act their parts to ensure victory for APC in all the elections.

Others present at the event included all House of Assembly candidates in the March 2, 2019 election, all ward chairmen in the local government, women leaders and groups, youth leaders, private individuals, representatives of Jamiu’s alma mater, hundreds of party supporters and friends who came to show solidarity for Jamiu’s ambition.