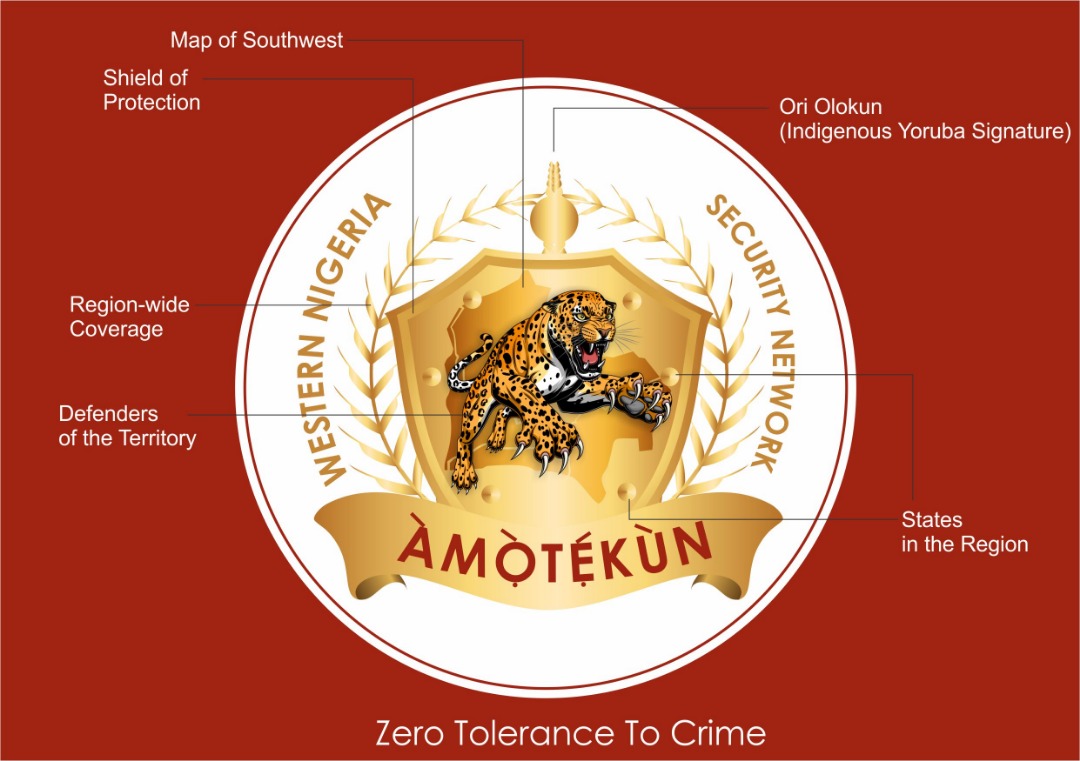 While speaking with hosts on the breakfast programme, the Special Adviser pointed that Amotekun was first drafted as part of the recommendations from a security summit that held in June 2019 in Oyo State following the spate of crimes (kidnapping, banditry, robbery, ritual killings), and other social vices that emanated from insecurity in the region.

He noted that governors of the six states (namely; Lagos, Ogun, Oyo, Osun, Ekiti, and Ondo), security agencies, and some major traditional rulers met under the auspice of Development Agenda for Western Nigeria (DAWN) Commission, and concluded to formulate a security network that will see to curb the menace in the region.

“A technical working group was set up during the summit which held in Ibadan to look into the issues at hand and formulate lasting solutions. It was the aftermath of that meeting that lead to the formation of the Southwest Security Network codenamed Amotekun,” he said.

Brig. Gen. Ogundana emphasized that Amotekun is only a regional security network created to support/boost the activities of existing security agencies such as the Nigeria Police Force, the Army and other paramilitary forces in a bid to curb crime and chaos and forestall peace in the region.

He also included that major importance of Amotekun is the ability to function in their various locality, saying that members of the security network are drawn from existing security operatives namely; Hunters, Vigilantes Groups, O’Dua Peoples’ Congress (OPC), Peace Corps, Anti-grazing Units. He said this is to ensure that a formidable team who has the grassroots knowledge, socio-cultural understanding of the region, and with rich knowledge of the geographical setting of the region, is fully in place to help tackle insecurity.

“We understand it is in the best interest of the region to have these local security operatives as part of the team so as to enable them to work effectively, having a better understanding of the terrain. These officials have adequate knowledge of the region; geographically, culturally and also breaking the language barrier which helps to build effective communication patterns with the people,” he added.

When asked why the name ‘Amotekun’ (Leopard), the Special Adviser explained that the choice of the animal as part of the logo and codename is to literally send out a message to perpetrators of the crime that a formidable team with a better knowledge of the western Nigeria terrain is out to end their reign.

“The leopard is an animal widely feared by other animals in the forest. It is also an animal which possesses special skills (speed, accuracy, and lethal grasp of its prey) in hunting other animals. The Southwest Nigeria Security Network is such a team with equal efficacy,” he said.

He further explained the organizational and leadership structure of Amotekun.

“During the technical session of the Summit, it was recommended that existing security operatives be adopted to form Amotekun with adequate training and retraining. The operation will kick off as soon as other documents which include mode of operation, constitution, etc., are duly circulated across the six states by DAWN Commission,” he said.

He also affirmed that the Federal Government is in no way against the setting up of Amotekun as claimed by some unconfirmed reports on Social Media.

“Amotekun is an intelligence-gathering outfit that seeks to work effectively with the Nigeria Police Force (NPF) and other security agencies in the region. We must understand that information gathering is key to the process of curbing crime. Therefore, Amotekun is committed to working with the people of the region up to the grassroots level to ensure we have enough information to fight crime. The governors in the region have a statutory responsibility to protect the lives and properties of the people who have voted for them to get to power. This is only a welcome development for the region and not an effort to sabotage the effort of the NPF or any Federal Government security agencies,” he said.

Gen. Ogundana stated more importantly that there are mechanisms in place to checkmate the excesses of any official of Amotekun in order to ensure quality service delivery.

“A Monitoring and Evaluation Team will be in place to ensure officials of Amotekun are properly checked for excesses. This will enable each state to measure the efficiency of officials assigned to duty. This is one of the major reasons why we are employing local security operatives who have a proper understanding of the area(s) they cover. Our objectives are mainly to maintain peace and curb crime in the region. We are not out to witch hunt any tribe or sect as perceived by some social media reports,” he said.

Funding is a major element for the creation and implementation of operation Amotekun. General Ogundana noted that the six governors have made adequate plans for funding, adding that the southwest states are committed to ensuring the smooth running of the security outfits.

The General thereby implored members of various communities as well as travelers in the region to work hand-in-hand with Amotekun to ensure collective success for peaceful co-existence.