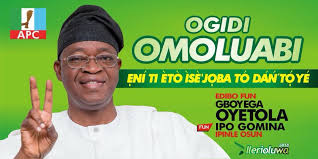 ACCEPTANCE SPEECH BY THE GOVERNOR ELECTOF OSUN, GBOYEGA OYETOLA, AFTER BEING DECLARED WINNER OF THE GOVERNORSHIP ELECTION HELD ON SEPTEMBER 22, 2018

Election into the Office of the Governor of the State of Osun was held on Saturday September 22, 2018, in which I flew the flag of the All Progressives Congress (APC) in a contest with 47 other candidates, representing their different political parties.

From the field report and the tally of the ballots, there was enthusiastic turnout at the polls. The huge number of candidates who vied for the office was unprecedented. Though there were few glitches and challenges here and there, the exercise was satisfactory. We can say there has been substantial compliance with the provisions of the constitution and the Electoral Act.

However, the election was declared inconclusive after the first ballot and a rerun was slated for Thursday September 27, 2018 in seven polling units in Ife North, Ife South, Orolu and Osogbo Local Governments Areas of the State.

This was disappointing. We had enough evidence and field reports, including signed result sheets, from our agents that confirmed that we won outrightly. However, as democrats, we accepted the verdict in good faith and prepared for the rerun.

In the end, I was declared winner by the Independent National Electoral Commission (INEC) after securing the highest number of votes cast in the election.

This election has been keenly contested, and a clear winner could not emerge until the tail end. Indeed, there was a dramatic twist in the end that kept us all on the edge and made Osun the focus of national and international attention. This is an indication of how democratic, free, fair and transparent the election was.

However, I cannot but observe that the election took place under a much more relaxed and freer atmosphere, compared with the previous elections, particularly the 2014 governorship election, during which the state was put under siege by the then Federal Government.

The democratic environment created by the APC under which this election was held is a clear indication of the great political development that has occurred in the past three years of our party’s administration, under President Muhammadu Buhari.

This election is primarily a victory for democracy, rule of law and due process. It is a victory for the right of every citizen to participate in their own governance which democracy represents.

The victory is an affirmation by the people of Osun in the APC government that has been on the saddle in the past eight years; and the acceptance of our ideology. It is a positive affirmation of our people-friendly policies and the way we have steered the ship of state, even under the most challenging circumstances.
This is ultimately a victory for the people of Osun that have been given a voice and a hope of democratic and responsible leadership.

I will like to commend and congratulate INEC for successfully conducting a free, fair and credible governorship election. I congratulate also our party, the APC, in Nigeria and South West, for its well-deserved victory at the polls, wrapping up the South West states and giving it the opportunity to use the progressive platform it offers for accelerated development of the region. I also congratulate Ogbeni Rauf Aregbesola, under whom I cut my political teeth and whose tenure was on trial during the election.

I regard the mandate given to me by the good people of Osun as sacred and I am taking it seriously. Of course, I have been part of the new beginning that started eight years ago.
Nevertheless, in continuing the glorious path on which I am now very familiar, it is a new beginning for me. I am committing myself the more to the good governance of Osun and the welfare of the people.

I will run an inclusive and participatory government. I will consult with the party, workers, communities, traditional rulers, the civil society and the people of the state in their heterogeneity. I will engage the youth, tap into their ideas and enable them to unleash their creative energy in a positive way.

I pledge to serve God and humanity and the people of Osun with my whole being, without prejudice to religion, ethnicity, race and ideology.

I will like to thank the Almighty God for His grace and divine enablement upon my life; and for fulfilling His promise to bless the land and people of Osun through me.

I will like to thank our great party, APC, for the overwhelming support given to me all through the campaign and for believing in me. The leadership and members of our party nationally and locally laboured hard for my victory. Our National Chairman, Comrade Adams Oshiomhole, backed me to the hilt. I thank him.
The national campaign committee headed by Governor Umar Ganduje and all the APC governors have my commendations and infinite gratitude.

I will like to express my profound gratitude to President Muhammadu Buhari for his invaluable support and for leading a delegation of party and government officials to my campaign. Vice President Yemi Osinbajo did a yeoman’s job. He made several trips to Osun and supported the campaign with all available resources.

My immense gratitude goes to Asiwaju Bola Ahmed Tinubu, the leader of leaders, for his selflessness and absolute commitment to my election campaign and for giving his all.

I cannot thank enough Ogbeni Rauf Aregbesola, who gave me an opportunity to serve and who carried me on his shoulders when the going was tough.

I must thank also the coalition that emerged for the rerun, including Senator Iyiola Omisore of the Social Democratic Party (SDP) and Osun Alliance of Collaborating Political Parties (ACPP) that wholeheartedly endorsed and supported my candidature.

I thank my lovely wife, Kafayat, and the children for believing in me and supporting me unreservedly. My wife, in particular, gave me the peace of mind and refreshing comfort at home.
I cannot end without thanking every member of my campaign team for their sacrifice, dedication and commitment. It is their victory as well.

I thank all the people of Osun, especially those who believe in our cause and voted for me. It is your victory. I thank our royal fathers, workers, transporters, market women and men.

The security agencies deserve commendation for keeping the peace and for their prompt response to every security challenge before, during and after the election.

I salute members of the media too for their coverage.

Once again, I congratulate and thank all member of APC in Osun for our hard-won victory.

I thank you all for your attention.
Ileri Oluwa ti se.
Osun a dara!