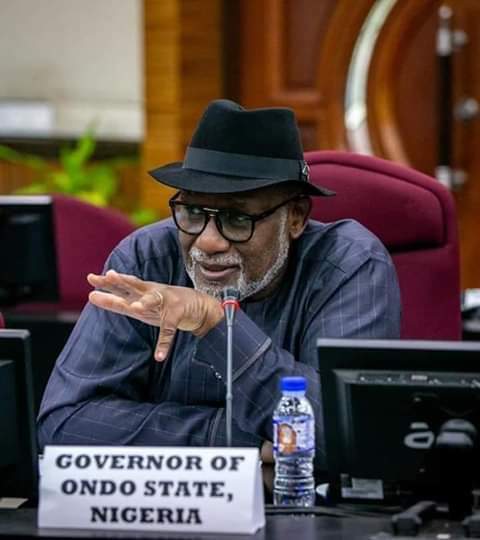 The National Working Committee of the ruling All Progressives Congress has suspended the Ondo State Governor, Rotimi Akeredolu, for anti-party activities.

The party’s NWC had on March 1 resolved to issue a query to the governor over what it described as glaring anti-party activities.
In a statement by its National Publicity Secretary, Lanre Isa-Onilu, after a meeting presided over by the national chairman, Adams Oshiomhole, the party had said the governor’s anti-party activities “greatly affected the fortunes of its candidates in the recently conducted presidential and National Assembly elections in the state.”
Isa-Onilu had, in a recent interview confirmed that the query had been sent to Akeredolu based on the directive of the NWC.
A member of the NWC, who spoke on the condition of anonymity, however, confirmed to our correspondent on Friday that the governor had been suspended.
The source said the decision to suspend Akeredolu was hinged on the fact that his case was similar to the allegations levelled against his Ogun State counterpart, Ibikunle Amosun, and that of Imo State, Rochas Okorocha, for which the two governors have been suspended.
He added that the NWC was also aware of the governor’s claim that he had not received any query from the party and therefore mandated its National Vice Chairman for the South-West to make it available to him.
He said, “Yes, the governor has been suspended by the NWC. He claimed that he has not seen the paper (query) and we asked the National Vice Chairman from the South-West to make a copy available to him.
“After the election, we want to build and not to destroy the house. But we want to do the needful. Since we suspended the Imo and Ogun states governors, we want to treat them the same way.
“We have suspended them but they need to defend themselves, It is like a query and a suspension. They have to advance reasons why they did what they did.
“Some people grumbled that why will three people commit similar infraction and we will suspend only two. That was what brought about the suspension of the Ondo State governor.”
When contacted on Friday, the party’s spokesman simply said “no comment.”
The party had earlier suspended Amosun, Okorocha, the Minister of Niger Delta Affairs, Usani Uguru, and the Director-General of the Voice of Nigeria, Osita Okechukwu, for alleged anti-party activities.
It accused the suspended members of campaigning openly for other political parties and candidates that were unknown to the APC, therefore constituting themselves as opposition to the APC candidates in their respective states.
Ahead of the general elections, Amosun threw his weight behind the state governorship candidate of the Allied Peoples Movement, Adekunle Akinlade, after the member of the House of Representatives failed to clinch the ticket of the APC.
Also in Imo State, Okorocha openly supported his son-in-law, Uche Nwosu, of the Action Alliance, against the APC’s governorship candidate, Hope Uzodinma.
The candidate of the Peoples Democratic Party, Emeka Ihedioha, won the governorship election in the state.
The APC’s NWC had also accused Amosun of instigating thugs to unleash attacks on party chieftains at the presidential campaign rally held in Abeokuta, the Ogun State capital, ahead of the presidential election.
When contacted, the Ondo State Commissioner for Information, Mr Yemi Olowolabi, said, “The matter is an internal affair of the APC, and whatever issues have arisen would also be addressed at the level of the party.
“But, contrary to claims that he was suspended for not responding to the query him, it is not true. The governor never got a query from the party. We only read of it in the papers and you cannot respond to such.”