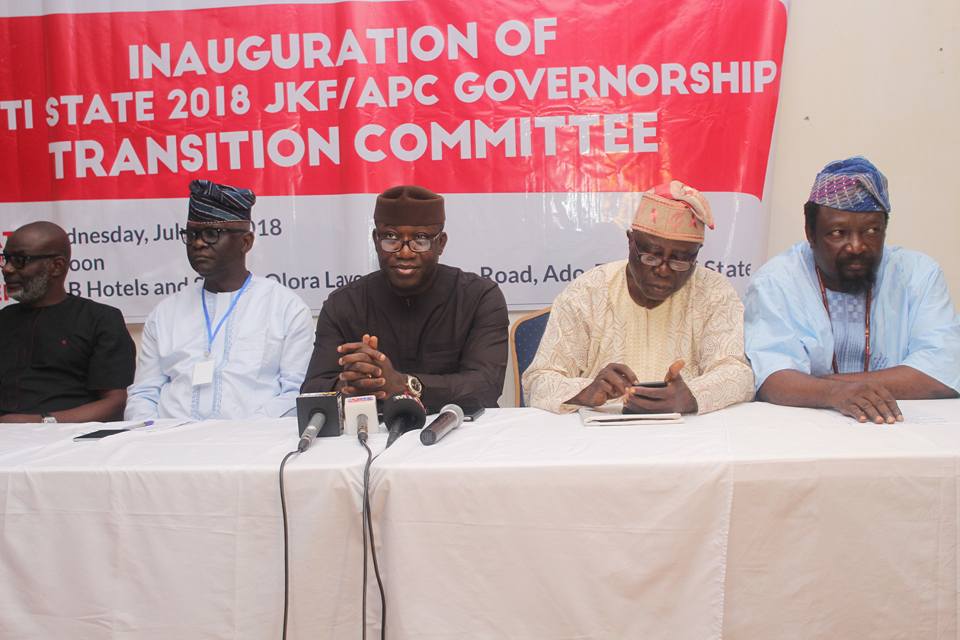 The Ekiti Transition Committee has stressed the need for Agriculture and agro allied business to lead the incoming government’s policy agenda in order to reverse the grave economic challenges of the state. This submission was made by the Chairman, Senator Olubunmi Adetunmbi when the Committee  delivered its report on schedule to the Governor-Elect, Dr Kayode Fayemi at a brief ceremony in Ado Ekiti on Friday.

“In spite of  the uncooperative position of the outgoing administration which refused to interface with the JKF/APC Transition Committee despite multiple letters to Gov Ayodele Fayose and visits to key officers in the administration, our Committee worked with information and documents received informally from various stakeholders, groups , some progressive members of the civil service and available published data”, Adetunmbi said.

As one of the quick win recommendations to the incoming government, the Transition Committee advised that Agriculture should drive the policy agenda as it had the greatest potential to impact the greatest number of citizens in the shortest possible time.
The need for Agric Investment and payment of outstanding salaries left unpaid by the Fayose administration was a priority request on the list of stakeholders expectations across multiple sectors in the state.

In his response, the Governor-Elect commended the Transition Committee for delivering on the assignment within the stipulated timeline. He noted that the uncooperative position of the outgoing government did not deter them from their assignment and assured that the report will be reviewed and their recommendations will guide his government in its commitment to restore good governance to the people of Ekiti State.

It would be recalled that The 34- Member Committee was inaugurated on July 27, 2018 with a six weeks mandate to assess the current state of governance, find out the expectations of stakeholders and identify quick win interventions and projects that can bring succor to Ekiti State within the first 100 days of the incoming APC administration