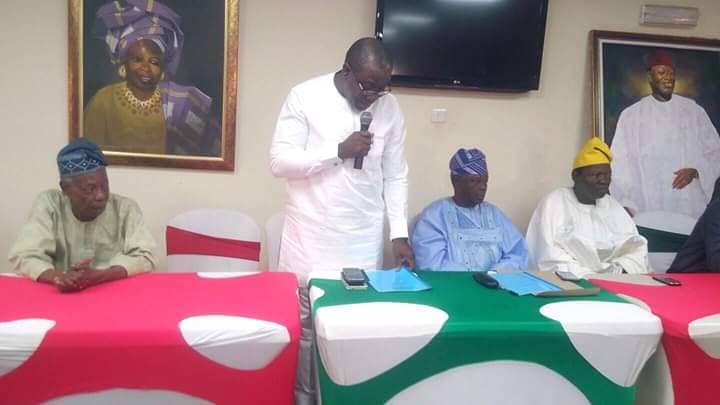 • As Adetunmbi leads other candidates to Governor.

Ekiti North Senatorial District’s candidate of the All Progressives Congress (APC) Senator Olubunmi Adetunmbi, on Tuesday led other candidates of the party to Isan Ekiti, the home-town of Ekiti State Governor, Dr Kayode Fayemi for a meeting bothering on various issues facing the party in the district.

Addressing the governor, Adetunmbi, appreciated the governor for his support so far and also acknowledged the efforts of the party members who stood with them, before, during and after the Party’s primary elections which saw them emerging the candidates of the party in various positions.

“I have come here to speak on behalf of all the candidates to express our views, on issues that pertain to the party and impending elections in our senatorial district. Your excellency, we’ve made concerted efforts, speaking with those who are aggrieved, resulting from the outcome of the recent primary elections of the party. We want you to further help talk to those who are yet to come to terms with the party on the choices of the candidates representing the party. It’s our own turn today, and tomorrow may come out to put you on vantage position, which may require our support; no matter how it comes.”, Adetunmbi said.

The candidates however promised their loyalty and vowed to be answerable to the party and its people. They opined that the welfare of the people would be their topmost priorities.

In the same vein, the 17-man committee set up by the leadership of the party in Ekiti North Senatorial District submitted its report to the governor. The chairman of the committee, Chief Ajayi impressed that thorough consultations have been done on various issues and challenges the party was having in the whole of the district.

He therefore urged the governor to be swift in acting on the report as it would be a panacea to very many challenges the party was facing in the district. He said, if thoroughly addressed, would place the party well ahead of the next year’s general election.

“Excellency Sir, we appreciate you for giving us the opportunity to be here. We’ve come together and we’ve been able to identify various areas that need attention in order to make our party free from rancour”, Chief Ajayi said.

In his response, the Governor of Ekiti State, Dr. Kayode Fayemi thanked the leadership of the party for deeming it fit to bringing everybody together. He further emphasized the need for the party Candidates to up their efforts. “I beseech all of you to go back to your various constituencies and work. Anybody thinking that the governor would perform any miracle to manipulate elections in his/her favour, such person is waiting for the ship to arrive at the motor park. You all need to go and meet with your people, so they can have reasons to vote for you.”

“My duty as governor is to give an enabling environment you all can build on. I’ve been paying the salaries of the civil servants as and when due. I’ve paid them this month and by tomorrow, I’m going to pay them from the outstanding the immediate past government owed them. The outstanding severance of the past appointees will also be paid. These and many more are those things I can do to help you out, to win people’s hearts. Nobody should expect any miracle and it has therefore become imperative for all of you to go back to your respective constituents and align with them.

Chief Akejioye, a leader of the party from Ekiti North Senatorial District, spoke extensively on the need to embrace peace and eschew malicious intents. He said every party member would have a taste of the government’s kindness. He stressed that the unity of the Party members would bring dividends of democracy to members’ doorsteps without envy. He reminded them of the need to ensure that the party wins the next year’s presidential, national and state assembly elections.

Senator Adetunmbi in his closing remarks, charged all members of the party to remain calm, as the government of Dr. Fayemi would leave no stone unturned, in making sure that things take a good shape and Party members were rewarded.

He thereby concluded by assuring the people that this kind of meeting shall be a continuous one, even after the election to review the activities of all the candidates, after winning elections.

Those in attendance were drawn from all the Local Government Area Councils that make up the senatorial district (Ido/Osi, IKOLE, Moba, Ilejemeje and Oye).