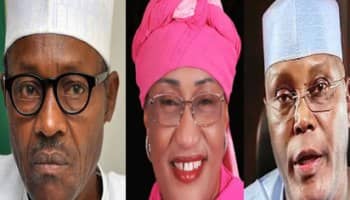 How prepared are we Progressives for Atiku’s impending media propaganda especially on the social media?

The earlier we realize Atiku already has an agenda though a negative one to rubbish us, the better for us!!

Few hours back, I got a call via messenger from a chap who claimed to be the leader of a group here in SW, “mobilizing the grassroots for the election of Atiku as president in 2019”.

He wanted a meeting between his team and myself to secure my “assistance in propagating Atiku’s programmes and cause” through my different channels in return for “some goodies”.

On further inquiries, I got to know of a detailed massive media “war” to be unleashed soon on the social media by the Turaki’s footsoldiers nationwide.

The game plan is to discredit the PMB administration’s efforts so far and create a picture of a failed government.
Leaflets printed in dialects are to be shared in the interiors, hamlets etc.
I politely made him know that i had self vowed against anything false propaganda in my politicking.

Whatever they read or see of me here ends in undiluted truth.

My dominating passion is my love for Progressive Politics and the nation. Nobody wey no like money ooo just dat some go purge you if not careful.

If I am to take what I was told, then the need to ask again is imperative!!!
How prepared are we?

This one that Her excellency is on a war path with her party, Shehu Garba is calling El-Rufai a liar, Akala has defected, Amosun is threatening all.

How prepared?
It still baffles me to see the APC that effectively used positive propaganda in turning the tide against the Jonathan administration is today battling to coordinate against a relentless onslaught of deliberate falsehood from the opposition.

“A major advice to Educated and patriotic Nigerians is to SCRUTINIZE EVERY POLICY DOCUMENT that comes during the 2019 campaigns, especially those proposed policies aimed at reducing poverty so as to grow our human development indices positively.

“I think APC should be grateful to the PDP for giving it an equal and worthy contestant for it to contend with democratically.”