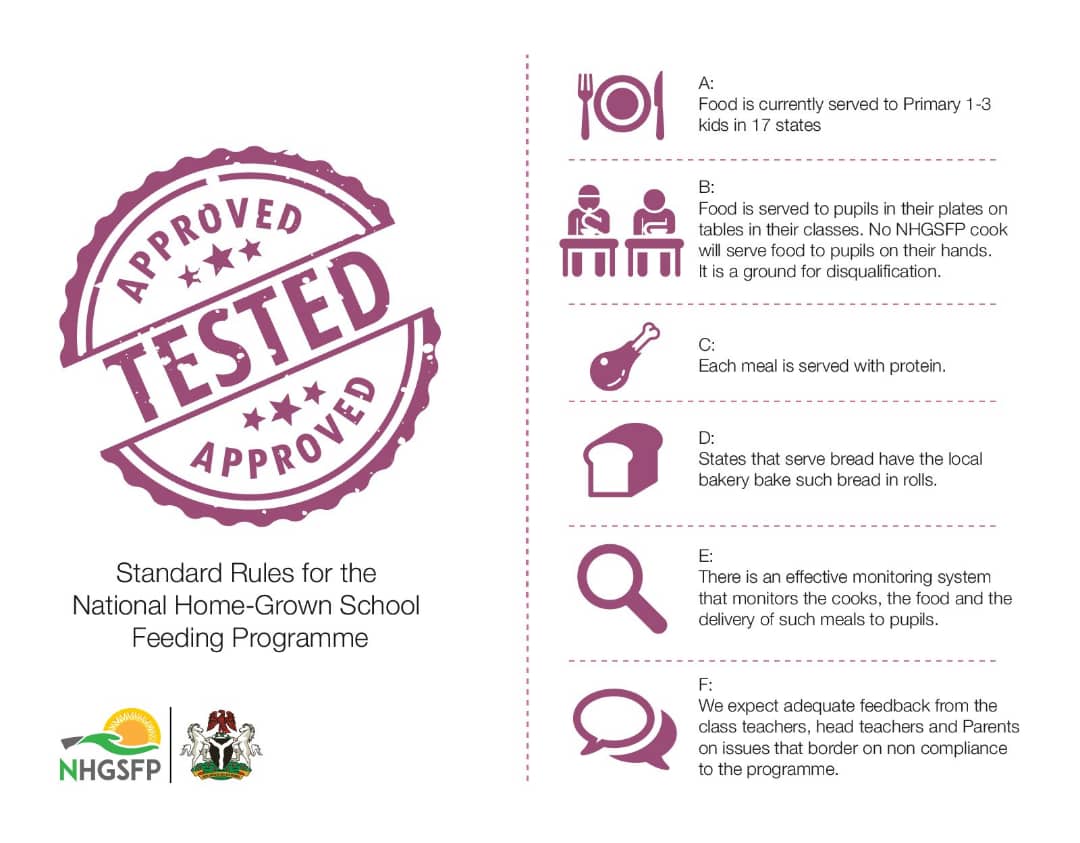 Ogun state inter-school football and track-and-field competitions are just around the corner, and teachers want to prepare the children physically and mentally for the task ahead.

Away from the laughter and shouts of encouragement on the field, four female cooks with aprons on top of traditional indigo-dyed adire gowns ladle porridge mixed with vegetables and fish into hundreds of stainless steel bowls with lids.

As the cooks ambled into a nearby classroom and began to place bowls on wooden desks, the 64 pupils remained quiet. After the dish was served, the students stood and began to sing “Bless this food O Lord for Christ sake Amen.” Then they sat down and began to eat.

“I want to say a big thank you to the federal government of Nigeria and the Ogun state government for providing food for us,” 10-year-old Ramon Samuel told Al Jazeera before opening the lid on his bowl.

Samuel and his classmates receive free meals every school day thanks to a national programme, which aims to provide nutritious meals to young schoolchildren in order to increase enrolment, help them stay in school, and reduce malnutrition, particularly among children from low-income families.

The Home Grown School Feeding initiative, a movement launched in 2003, is driven by national governments to improve the lives of schoolchildren and farmers alike. It is practised across the continent, including in Ghana, Kenya, Mali, Ethiopia, Namibia, Botswana, Ivory Coast, and South Africa.

The concept is not confined just to the continent as Brazil, Japan, and Italy have similar programmes aimed at keeping children fed while promoting local agriculture.

Though the scheme began in December 2016 in Nigeria, it is not entirely new here. Nigeria’s former President Olusegun Obasanjo launched a pilot programme in 13 states in September 2005, but after a few years, only southwestern Osun state maintained it.

The plan was reintroduced by President Muhammadu Buhari in December 2016 as part of his administration’s multi-million dollar National Social Investment Programmes to address poverty, hunger and unemployment in Nigeria.

The school programme operates in 20 out of Nigeria’s 36 states and has fed nearly seven million pupils in about 40,000 public schools, the programme’s manager Abimbola Adesanmi told Al Jazeera. She said more than 68,800 jobs have also been created through the initiative.

Knock-on effect
Adeleke Adewolu is the commissioner of special duties and inter-governmental affairs in Ogun state. He said the meals are not only nutritious but also serve as a “social safety net” for low-income households.

“If children eat nutritious food it will enhance their learning ability and this will have a knock-on effect on their cognitive development and help to encourage enrolment and retention,” Adewolu said.

The programme provides income for thousands of people, including farmers, cooks recruited from local communities, and those involved in the processing and transportation of food, he said.

In Ogun, the coordinating team collaborated with the ministries of education, health, agriculture, women’s affairs and community development to divide farmers into cooperative groups and link them to about 3,000 cooks who were trained and deployed to more than 1,500 schools. Farmers received training in seed quality and fertilisers to grow enough food to meet demand.

The cooks – who are responsible for procuring ingredients for the daily meals – are given a budget of 70 naira ($0.23) per child each day. With help from the state government, they received 57,000 naira ($188) in loans to purchase water drums, pots, bowls, uniforms, and cooking utensils.

“It gives me great joy to help in feeding the children in Baptist Primary School,” said Omole Imoleayo, who left a career in banking to join the programme. “We receive our payment without delays and I have more time for my family now.”

Sourcing foods locally helps millions of small farmers who produce up to 90 percent of Nigeria’s food but are mired in grinding poverty.

“This has created a well-structured market for the farmers since they now know how much to produce and when it is needed,” said Tinuola Shopeju, Ogun’s programme manager.

Shopeju said the initiative is a “perfect model” for addressing food insecurity and improving local agricultural production in Nigeria, which imports about $20bn worth of food annually.

The menu differs daily and every state adopts its own meal schedule. In Ogun, schoolchildren get rice, stewed fish, and beans but also delicacies such as Ikokore – a dish made from water yam.

“In the short term, children with worms may be too sick or tired to attend school or to concentrate. Basically, we do not want to feed worms, rather children,” she said.

Teachers in Ogun say the programme is not only helping young students stay in school, but also attracting those from private schools. Ogunkola Adefunke Deborah, headteacher of Baptist Nursery and Primary School, said her pupils now “come to classes regularly” and are “very punctual”.

“We have over 80 new pupils, most of them came from private schools,” she said. “Before you hardly see parents coming here, but now they come to ask us why their kids beg to be brought to school early and why they always return home with their pocket money.”

Deborah shared an anecdote of a boy who refused to go home even when he was sick because he didn’t want to miss a meal.

Rebecca Faronbi, 72, was devastated when her son died and left her with four grandchildren to take care of. Her three-year-old granddaughter now receives the free meals at school.

“Until the feeding programme started I was struggling to feed the children. My granddaughter wakes me up before 7am and tells me she wants to go to school because she will get free food there,” Faronbi said in the Yoruba language, which is widely spoken in southwestern Nigeria.

Rampant malnutrition
Research has shown that 42 percent of schoolchildren in Nigeria suffer malnutrition, and this has caused a high rate of absenteeism.

UNICEF estimates about 2.5 million Nigerian children under the age of five suffer from severe malnutrition each year, with about half a million children dying from it.

With a quality assurance tracking system known as #TrackWithUs, the programme handlers have urged Nigerians to visit nearby schools to check if meals meet the required standards and report any cooks who aren’t serving proper food.

“The campaign has helped us track activities in schools and strengthened our existing monitoring and supervision mechanism,” Adesanmi said. “Since there is a reward and sanction system in place we have been able to name and shame cooks who do not comply with our standards.”

A major barrier to the programme’s success is the inability of state governments to scale up the meals to senior classes in elementary schools. The federal government caters to pupils from Grades 1 to 3, but with many states struggling to pay salaries, pupils in higher grades are not being fed.

Experts hope the government will not repeat the same mistakes made a decade ago when a combination of inadequate funding, poor logistics, and corruption crippled the scheme.