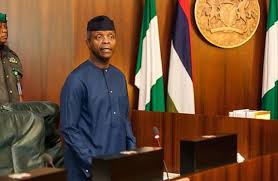 Vice-President Yemi Osinbajo says the approval of N5.8 billion emergency food intervention fund for the north-east was within his constitutional authority.

The house of representatives had indicted the governing board of National Emergency Management Agency (NEMA) chaired by Osinbajo over what it described as an “illegal approval”.

In a statement released on Friday by Laolu Akande, spokesman of the vice-president, the approval was said to have become necessary because the federal government needed to “urgently” purchase stored grains for distribution to internally displaced persons (IDPS).

“These presidential approvals were well within the clear constitutional authority of the Acting President, who needed to take emergency steps to forestall acute food shortages in the affected States and there was nothing illegal or unconstitutional about them. The approvals were duly communicated by the Deputy Chief of Staff to the Governor of Central Bank, Director General of NEMA and the Minister of Finance for implementation,” the statement read.

He said the approval was based on a request raised via a letter dated May, 25, 2017, by Godwin Emefiele, the governor of the Central Bank of Nigeria (CBN), who served as facilitator of the national food security programme.

“In its report, the Committee alleged that a sum of N5,865,671,939.26 was approved and released in June 2017 vide a Memo raised from the Office of the Acting President, directing the Honourable Minister of Finance and the Accountant General of the Federation to so act. The House Committee also concluded that the payment made was in contravention of approval of the National Assembly. This conclusion is both false and misleading,” he said in the statement.

“To start with, it is important to understand the context of the transaction. This was at a time when internally displaced persons and their host communities faced very severe food shortages throughout the North East, as a result of successive poor harvests and abandoned farmlands, minimal cross-border cash crop trade and lost economic opportunities.

“On 15th April 2017, the United Nations World Food Programme (UN WFP), a major aid organisation and food supplier to the region, had issued a warning that it would be reducing its vital support to about 1.8 million IDPs by as much as 85%, due to corresponding reduction in funding by the donor countries. Around the same time, the United Nations Commission for Refugees in Geneva also warned of the growing risk of mass deaths from starvation among people living in the conflict areas.

“The Federal Government of Nigeria (FGN). A Presidential Committee on Emergency Food Delivery to the North East was convened and the Committee met on the 13th of May, 2017 to kick off the process, with the then Acting President as Chairman.”

The vice-president argued that section 43 of the public procurement act makes provision for emergency procurement, in which case the procuring entity is allowed to engage in direct contracting for goods and file a report thereafter with the Bureau of Public Procurement (BPE).

He added that the suggestion that the grains were never delivered to the target states is falsehood.