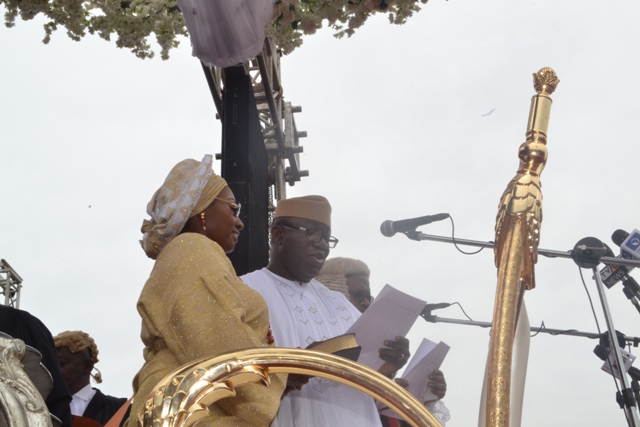 Governor John Kayode Fayemi ruled Ekiti State between October 2010 and October 2014. He made a failed bid for reelection just before leaving office on October 15, 2014. The ‘’mysterious’’ loss at that poll to him and his team till today remains unraveled. But the doggedness in him typical of many Ekitis will not allow him to settle down with national might at the Federal level where he served as Honorable Minister of Solid Minerals Development from 2015 until his July 14 victory at the 2018 Ekiti gubernatorial elections. Fayemi defeated the candidate, Prof Olusola Eleka, of the then incumbent, Mr. Ayo Fayose, to return to the job he left four years ago and to the exalted Oke Ayoba Government House which he helped built but barely used.  Not just that he returned to serve as governor but to the business of governance in Ekiti which he termed “unfinished”. And this is with much relief to the people of Ekiti especially when it is compared with the totalitarian and overbearing status of his predecessor who on October 16 kept a date with the EFCC in Abuja while Fayemi took the oath of office in Ado Ekiti.

After the oath, Fayemi gave the traditional inaugural speech beginning with the “Never Again” poem composed by his equally intelligent and gender rights crusader wife, Erelu Bisi Adeleye-Fayemi. Beyond the pageantry of the poetry piece, Fayemi, among other things expressed his administration’s goal to tap into the modern economy, the knowledge economy. He talked about it four years ago. I don’t have access to Fayemi’s policy document on this. And I initially felt I am not able to tell this is what he meant by knowledge economy. But a recent reiteration of the goal when he received the report of the Visitation Panel to Ekiti higher institutions and the media agency prompted a belief in me that this man means business. So, if it is like what knowledge economy is generally known to mean, and how it has positively impacted economies of Israel, the US and others, the fact that a governor in Nigeria attempts to tap into this 21st century resource is cheering enough for me.  As newsed by the Punch Newspaper of December 19, 2018, Fayemi described the knowledge economy as one of the four-point agenda of his administration. To this end, he plays high premium on the vibrancy of the State-owned tertiary institutions and the broadcasting service- radio and television. His goal is to leverage the higher institutions of the state to deliver the development agenda of his government. This is laudable more so that it is in consonance with the tenets of knowledge economy.

Knowledge economy is the one in which growth is a function of quantity, quality and accessibility of the information available, rather than the means of production. The term, coined by Fritz Machlup of Princeton University in 1962, knowledge economy according to Investopedia is a system of consumption and production that is based on intellectual capital. Prevalent in developed countries with service-based economies, knowledge economy has research, technical supports and consulting as its major activities. It is a product of the information age where services of knowledge such as human expertise and trade secrets are vital economic resources. According to the World Bank, four key pillars are required for any country to participate in the knowledge economy, viz: 1. education and training; 2. information infrastructure (radio and internet inclusive); 3. economy incentive and institutional regime that create enabling regulating and economic environment for free flow of knowledge, investment in ICT and entrepreneurship; 4. innovation systems such as network of research centers, universities, think tanks, private enterprises and community groups.

Given the foregoing and the steps taken so far by Gov. Fayemi especially with the recently concluded Visitation Panel’s assessment of  Ekiti State-owned higher institutions and the broadcasting service, I am not in doubt that the governor knows what he is talking about. It is only cheering that he has declared that knowledge economy is one of the four cardinal goals of his administration. Going in this direction is what one Chukwuemeka Fred Agbata Jnr. in a Punch newspaper post of December 18, 2016 termed as “wise strategy”.  While this his first step is good, one can only anxiously await the outcome of the reports the panel submitted and what the government will do with it to stimulate the ethos of knowledge economy in Ekiti. While we await that, it is important to point out that people are the focal point of two of the four critical pillars the World Bank considered as requisite components of knowledge economy. “An educated and skilled population is needed to create share and use knowledge’’ reads the World Bank statement. It also identified the place of a network (of people in) research centers, universities, private enterprises and community groups in tapping into the growing stock of global knowledge, assimilating and adapting it to local needs and creating new knowledge.

Thus, it will be interesting to see what institutions in Ekiti will turn into in terms of creating new knowledge through cutting edge research with the supports of the government. It will be wonderful to see Ekiti indigenous knowledge exported to global community through ICT. It will be massive to see huge ICT infrastructure deployed to communities and schools in Ekiti. Will a Commission for Knowledge Economy and Information Infrastructure be created? This will be a fantastic statement of commitment and departure from the phony era of stomach infrastructure that left all hungrier with empty bellies. Will co-creation and innovation hubs be established across the zones of the State? Will the government make grant available for specialised research in this area? These are the few expectations one would look out for.

However, a critical sector that drives the success of knowledge economy in developed countries is the Library. I have written extensively on this in my article titled “Journey to the Largest Library in the World and the Need for a Library-Conscious Nigerian Society” upon returning as an IFLA/OCLC Fellow from the USA in 2016. But a quick summary of that fascinating society is that, the library is a critical public infrastructure that received more patronage than McDonald’s or combined sport activities. The people love knowledge, they are readers and the library is a second home for all. The Library Card is like a citizenship card and libraries are community squares, hubs of a sort. These made migration from resource-dependent economy of the industrial era to the service-based economy of the knowledge era or information age easy. We will continue to struggle on this side as much as it is still true that secrets are best kept from Africans if kept inside books.

So the library and reading must be revisited in our state, regional and national plans. Our poor library and/or reading cultures will create the unwholesome setback for actualizing the full benefits of the knowledge economy. In this information age, it is not enough to know as a secondary school leaver, university graduate or what have you but what we do with knowledge is key to personal and communal progress and to that end is the need for information literacy which is a critical function of the library. Reading and library open up the mind to explore great possibilities. A journey into the library is a journey into the farthest past to glimpse what had been and a trip into the future to see what can be even as it affords the immediate benefit of reimagining what the present should be. Without a functional library system suffice it to say that this attempt by Ekiti State Government is an effort waiting to crash. Gov. Fayemi must factor in functional public library system into his agenda for knowledge economy. It will awfully pain His Excellency to know that there is only one unattractive small public library in Ekiti to serve more than two million people, the Ekiti State Library Board near the old Governor’s office. That hut can only serve as a clog on the wheels of this administration’s drive. It is important to state, however, that this is not a situation peculiar to Ekiti, it is a national tragedy. I realized this woeful state of our society as a result of my privileged visits to libraries in other climes where the  library has been used as a fuel upon which service-economy burns brightly.

Ekiti dubbed as fountain of knowledge must now take the lead and change the library and reading narrative of Nigeria. Ekiti must lead by building beautiful, modern and eye-catching public libraries across its towns and communities. It will not be out of place to declare state of emergency on Ekiti State Library sector. An immediate construction of sixteen libraries across the sixteen LGAs must consume the government’s finance in the first full year of this administration followed by more libraries down the remaining years of the tenure. These libraries must be constructed and equipped in such a manner to enforce modernity, emphasis Ekiti pride and place in the knowledge sector, advertise culture and imbibe technologies- digital, solar, etc. A good intention-ed library revolution project can receive funders’ grants from overseas. I have also written a piece on how library can drive personal and community development through modern services. I have a proposal for a library-oriented boom of Ijan-Ekiti, my hometown, which can be replicated for other towns. Long and short of it is that, Gov Kayode Fayemi must rethink his knowledge economy agendum by factoring the library into it. The time to do it is now!

And in case you doubt why, from America to Britain, library has been regarded as the centrality of the knowledge economy. In fact, the President of the Metropolitan New York Library Council, Dr Norman Jacknis, in a January 2016 post titled “Library as the Central Institution of the Knowledge Economy” affirmed that “the library is the most cost-effective widely available institution that can help individuals keep up their skills and knowledge”. While the term “widely available institution” is true of library overseas, it is the scarcest unit of our society. This must change and Ekiti must drive the change NOW!