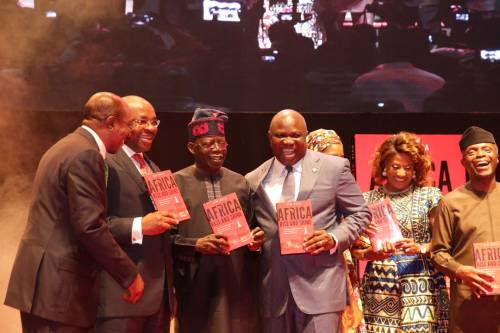 Our Senior Correspondent, Olalekan Smart, in this eye-opening investigative piece, writes on the crisis of confidence currently plaguing the bond between the man referred to as Governor Emeritus of Lagos State, Bola Ahmed Tinubu and the incumbent Governor of the state, Akinwumi Ambode, stressing that unknown to many, the hullaballoo in their associations might not be unconnected to a multi-billion naira contract for the procurement of OB Van and numerous transmission gadgets for Lagos State Television (LTV) and other sundry issues;

THE EMERGENCE OF AMBODE

Like a thunder strike sounds in the midst of fun seekers, most Lagosians were shocked to their marrow when sometime in early 2014, the Oba of Lagos, Rilwan Akinolu, a retired Assistant Inspector General of Police, declared that Akinwumi Ambode, a certified Chattered Accountant from Epe would succeed the then Governor of the state, Mr. Babatunde Raji Fashola, SAN.

“The Eleko of Eko is joking, who is he to tell us who would be the candidate of our party?”, Sikiru Olorunwa, a chieftain of All Progressives Congress (APC) from Ajeromi Ifeolodun Local Government Area of the state told this writer at a function while reacting to the endorsement of Ambode by Akinolu.

As a reporter who has been in the political cycle of Lagos for over two decades, i knew Akinolu was speaking on behalf of Tinubu, his man-Friday but many people took the endorsement of Ambode, a totally unknown character in the political firmament of the state as a normal error of judgment from the former police officer.

Day by day, the name Ambode began to ring bell. Those who could read the game well began to align. Two weeks after Akinolu’s declaration, Ambode declared his ambition. Fashola, considering the egghead of politicians interested in his seat, never took Ambode serious.

After many twist and turns, Tinubu, the man who own the political machinery of Lagos, in July 2014 formally informed Fashola of his intention to back Ambode in the presence of Oba Akinolu. The dumb-folded Fashola, according to reliable sources, was said to have left the meeting without uttering a word.

“Ambode is from Ilaje Local Government Area of Ondo State, he can’t be Governor of Lagos”, Fashola’s men in the media fired back through invincible proxies, but the story failed to have effect.

“Why Ambode, the man sacked for multibillion naira fraud by Fashola in 2012” Fashola’s men queried in disappointment but they lacked the charisma to confront Tinubu, the man whose through structure they all rode to political stardom.

After the intra-party opposition against Ambode collapsed, the competition from the popular and acceptable candidate of the then Nigeria’s ruling party, Jimi Agbaje of the Peoples’ Democratic Party (PDP) was not enough to stop the emergence of Ambode as the 5rd democratically elected Governor of the state on May 29th 2015.

A LOYAL AND DUTIFUL GODSON

Since his day of inauguration till few weeks ago, Ambode, like Fashola, takes instructions on every developmental policy from Tinubu. All the 40-member state executive council were singlehandedly handpicked by Tinubu and handed to Ambode to swear in. The 57 council chairmen, board members of commissions and parastatals, including permanent secretaries and directors were appointed by Tinubu for Ambode.

All major contracts approved by the state executive council were drafted by consultants working for Tinubu for Ambode to sign. I can say very expressly that no road is awarded in Lagos State without the blessing of Tinubu.

And many times without number, the Governor emeritus with his house situated at 1, Bourdillion Road, Ikoyi, had overruled several contracts awarded by Ambode without his blessing among them is the procurement of an OB VAN worth N1.5billion and Cameras worth N900million for Lagos State owned Television, LTV aimed towards improving its services and coverage.

However, when Tinubu got the hint of the contract through a top Director in LTV (name withheld), he was said to have put a phone call to Ambode that the contract be suspended the pending further instruction from him but Ambode, backed by a cabal led by his Commissioner for Information and Strategy, Steve Ayorinde, who is now in-charge of Ministry of Art and Tourism, urged the governor to ignore Tinubu, a decision which he (Ambode) indeed took and proceeded to award the contract against the instruction of his godfather.

Like a usual African godfather, Tinubu wasn’t pleased that his ordered was rebuffed but he overlooked the contract which he had thought would be executed by an Ondo man who served him when he was Governor.

However, month after months and after two years the contract was awarded, the OB VAN, is yet to be delivered while the Cameras, though delivered, falls below expectation and failed due process and quality and assurance control integrity test.

STEVE AYORINDE’S CONNECTION WITH THE FRAUD

The contractor, a Lebanese hired to supply the OB VAN by the Steve Ayorinde led Cabal of the information unit of the state government, according to reliable sources, was paid 50% upfront to purchase the OB VAN, Cameras and other gadgets from a British Firm called Excellence Transmission Inc Limited based in Manchester, United Kingdom with an agreement to complete the payment within six months after payment of first instalment.

The OB VAN, according to the agreement paper signed between Excellence Transmission Inc Limited and LTV, was expected to be released upon completion of payment by Lagos State Government. Out of Two Billion Four Hundred Million Naira (N2.4billion), a sum of One Billion, two hundred million naira (N1.2billion) which was 50% of the contract sum was released on the order of Ambode.

However, while 50% of the Cameras were released, the OB VAN was not released until full payment is made as agreed. Meanwhile, the cameras, upon delivery were confirmed to be substandard and fell below standard, contradicting the sole purpose which the cameras were bought.

The existing cameras of the station were said to be of higher quality than the ones supplied from England. Two Directors from the station, backed by Tinubu were said to have refused to sign the due process paper confirming that the cameras were delivered as agreed in the contract paper.

The refusal of these two Directors of LTV, whose name was concealed by this writer, was said to have angered the governor who ordered their transfer out of LTV. New Directors were posted to LTV to sign the due process paper for the cameras which are currently rusting away at the station situated along Agindigbi road, Ikeja.

Three months after the resumption of the two directors posted to cover the fraud at LTV, another set of senior staff jointly wrote a memo to Steve Ayorinde, asking for the where-about of the remaining cameras and when the OB VAN would be delivered.

Ayorinde, according to insiders, rushed to the governor to show him the memo containing some scratching remarks which goes as thus “Sir, the rest of the cameras were ought to have been delivered two months ago with our OB VAN but despite several letters written, no response from Mr. Delkash Farez, the Lebanese hired by your office to purchase the gadgets on behalf of our station”, a paragraph in the memo from five top staff of LTV sighted by this writer to Ayorinde, reads.

“What an effrontery”! Ambode said upon reading the memo, wondering who gave the memo-writing LTV staff the audacity to question his action. But upon investigation by Ambode, the LTV staff were said to enjoy the support of Tinubu which prompted the governor to again, transfer them out of the station.

When the hues refused to die down as rumours against Ayorinde led cabal continued to boom like wave of ocean within Alausa, Governor Ambode redeployed his image maker to Art and Tourism Ministry. As expected, the hullabaloo about the OB VAN and camera contract scam reduced but failed to die down as envisaged by the Governor.

N1.2BILLION WENT DOWN THE DRAIN

N1.2billion deposit out of N2.4billion was paid to Delkash Farez, a Lebanese to procure an OB VAN, 25 Cameras and other transmission gadgets for Lagos Television from Excellence Transmission Inc Limited based in Manchester, United Kingdom. However, while cameras and transmission equipments not worth more than N50million were supplied, the OB VAN, over two years after 50% deposit were made, has not been delivered.

Over One Billion Naira of Tax Payers’ Money went down the drain, Tinubu queried but the interest of the masses may not be the cause of Tinubu’s anger if not for the fact that the contract was awarded against his wish yet, OB VAN was not supplied and substandard cameras were delivered.

Acting on a petition secretly forwarded to him by some concerned staff of LTV recently, Ambode was told by Tinubu to explain the situation of the OB VAN which he had planned to use at his (Tinubu) owned private broadcast station, Television Continental (TVC) for LIVE transmission of political rallies for commercial purpose ahead of 2019 general elections.

An angry Tinubu, without mincing word, was said to have listed several blunders and steps Ambode had taken to undermine his authority such as the termination of refuse collector contract to party chieftains to hire the obviously in-efficient VisionScape Concept to the LTV contract scam, Tinubu warned the governor to provide the OB VAN before July 2018 or forget his 2019 second term ambition.

But Ambode, in his response to Tinubu explained that the Lebanese hired to represent LTV before the British Company manufacturing the OB VAN has disappeared to the thin of air and all efforts made thus far through the Lebanese embassy in Lagos and Abuja to locate him have proven impossible, an excuse that failed to convince Tinubu.

Ambode, on the advice of his think-tank group led by Ayorinde, in a move to outsmart their godfather, concluded to push Tinubu into defence, hence the recent petition written by a former ally of Tinubu, Mr. Tunji Apara to the Economic and Financial Crimes Commission over the activities of a tax consulting firm, Alpha Beta, said to be owned by the former Lagos State Governor in the state since 2003.

Nonetheless the rebuttal of Ambode, this writer gathered from very reliable sources that the OB VAN was purposely designed to fail by the governor and his boys. The Lebanese was instructed by Steve Ayorinde to disappear from Nigeria until the dust is settled.

According to the contract paper between LTV and Excellence Transmission Inc Limited, the payment must be completed within six months, failure which the company would entertain offers from other interested buyers.

And 15 months after 50% payment (65% higher than the value price) was released by government and money transferred to UK, LTV failed to pay the balance.

But the UK firm, when lobbied by some staff of LTV said the market price of the OB VAN compared to when Lagos State Government paid 50% had gone higher, thus, government would have to pay more to get a VAN equivalent to the one initially ordered for as the original van paid for has been sold to a Television Station in Malaysia when Lagos State Government failed to pay the balance as agreed in the contract paper.

A check at the 2017 appropriation of Lagos state however showed that the balance of the OB VAN whose initial deposit was captured in 2016 budget, has been released clandestinely without following due process. And to cover up the fraud, 11 staff of LTV have either been redeployed or retired from the service of Lagos State Government.

I therefore ask, will the LTV OB VAN ever return? Only God, the creator of Time, a creature that changes day to a night with an amazing ease, can tell!!!!