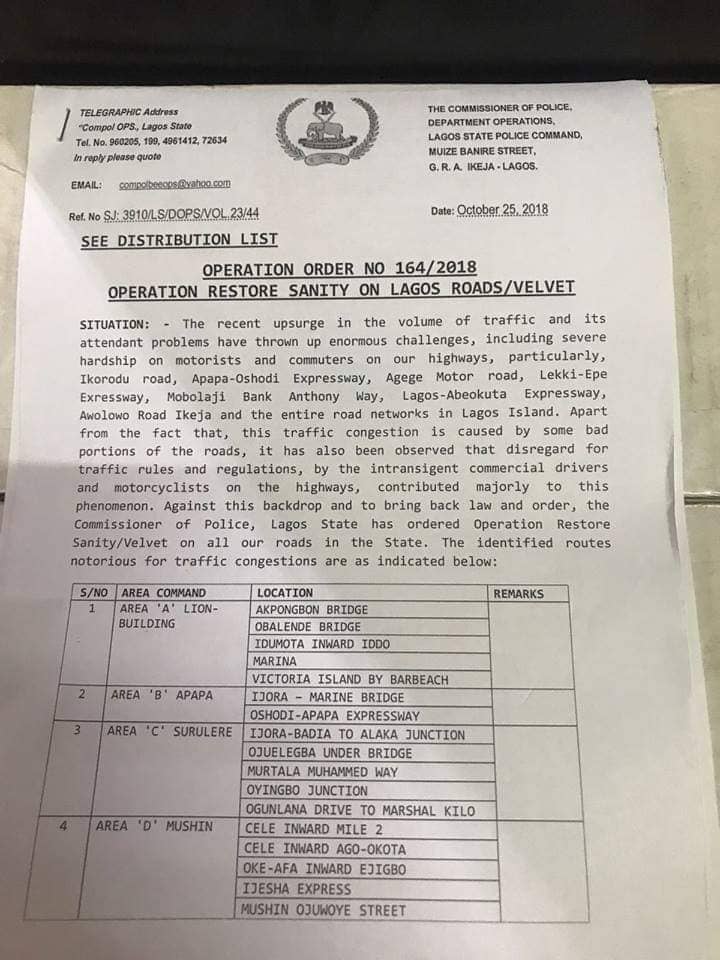 The Lagos State Police Command has launched a joint operation with other sister agencies to seriously tackle the upsurge in traffic gridlock on roads across the State caused by lawlessness on the part of some motorists, among other factors.

Tagged Operation Restore Sanity On Lagos Roads/Operation Velvet, the police said it would henceforth impound the cars of defaulting drivers and arraign them immediately in a Mobile Court that will be attached to the joint service team to enable quick dispensation of justice to erring motorists.

In a statement on Sunday by the Public Relations Officer of the State Police Command, CSP Chike Oti, the police said it had already identified the worst hit areas, while the joint operation team involving the Lagos State Traffic Management Authority (LASTMA), Federal Road Safety Corps (FRSC) and the Nigeria Security and Civil Defence Corps (NSCDC) had been constituted to commence enforcement activities with immediate effect.

According to Oti, “The frustrations of commuters plying Lagos roads, substantially caused by recent upsurge in the volume of traffic and lawlessness of some road users with its attendant gridlock, has attracted the attention of the Nigeria Police, Lagos State Police Command and it has resolved to tackle the hydra headed problem with all the seriousness it deserves in order to bring back law and order on the roads through a Joint Service Operation code named ‘Operation Restore Sanity On Lagos Roads/Operation Velvet.’

Oti added that the Commissioner of Police, CP Imohimi Edgal had already met with State Chairmen of all major transport unions and leadership of LASTMA and FRSC where the root causes of the chaotic traffic were traced to activities of motorists driving against traffic, adding that the relevant laws would be applied to address the situation.

“In a meeting held on Saturday, October 27, 2018, at Powa Secretariat, Oduduwa Street, GRA Ikeja, attended by the State Chairmen of all major transport unions in the State, Federal Road Safety Corps officials and the Lagos State Traffic Management Agency (LASTMA), the Commissioner of Police, Lagos State, CP Imohimi Edgal, noted the activities of intransigent commercial drivers and motorcyclists as well as motorists driving against traffic and on the BRT lanes, as root causes of the chaotic traffic situation being experienced in the State.

“He, therefore, warns that the police in collaboration with sister agencies like the Federal Road Safety Corps (FRSC), Civil Defence Corps of Nigeria Lagos State Traffic Management Agency (LASTMA), will impound the cars of defaulting drivers and arraign them immediately in a Mobile Court that will be attached to the Joint Service Team to enable quick dispensation of justice to erring motorists,” Oti quoted the CP as saying.

The police said the decision to come up with the enforcement became imperative owing to the fact that if allowed unchecked, the situation has the potential to lock down the entire State and bring the wheel of economic activities to a grinding halt.

The latest Ibrahim Index of African Governance sounds a warning for a continent where the sub-Saharan population is projected to double by 2050.
Former Lagos speaker, 49 others arrested for killing policeman Monday, October 29, 2018