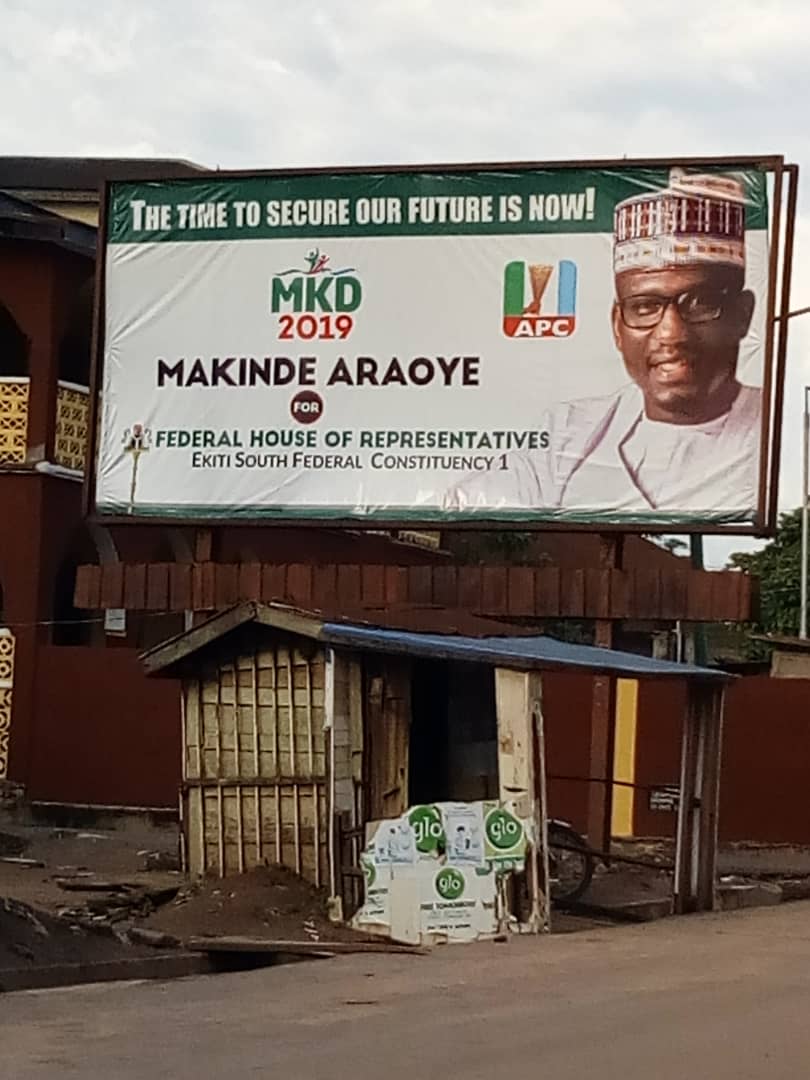 House of Representatives hopeful in Ekiti South Federal Constituency 1, Mr Makinde Araoye has declared those behind his blackmail as persona nongrata. Hence his decision to ignore them and their principal.

Speaking to Fountain Newsbreaker at Ikere Ekiti today, Mr Araoye noted that “only unserious aspirant will be joining issues with a faceless writer who is not from his constituency more so that the said Mr Jacob Ilesanmi is confirmed by those who know him to be a psychiatric patient.”

Araoye, who shared the joy of his birthday on Wednesday amidst thousands of his supporters, announced that he would not look back in his determination to improve the life of ordinary Ekiti people. “Any life which is not dedicated to the pursuit of better lives of the poor masses is not worthy of living,” he said.

The Ilawe Ekiti born son of a Medicine Professor considered it a sign of weakness for an aspirant to be employing “some never-do-well” to be destroying opponents. According yo him, “I’m a well brought up son of Ilawe and will never condescend so low to the extent of tarnishing my opponent’s name or anybody for that matter.”

Speaking during a rally in Ise Ekiti yesterday, Otunba Kayode Fasae aka Jimlas urged Ise people to vote for Makinde Araoye who he described as “a very humble and intelligent young man. He is not a double dealer politician who will speak from both sides of his mouth. Whatever he says, he will stand by it”.

In the same vein, a former Chairman of Ikere Local Government, Otunba Bisi Aloba, assured that “Ikere people will vote massively for Makinde Araoye because of his pedigree and track record”. Aloba who was a governirship aspirant in the last APC governorship primary election noted that Araoye would bring dividends of democracy to the people of the Ekiti South Federal Constituency 1.

It would be recalled that one Mr Jacob Ilesanmi, an indigene of Okemesi Ekiti wrote some unprintable things about Mr Araoye and circulated it on social media. Since yesterday, a counter reaction had been trending on the social media. Here is the excerpt of the reaction:

“With the vast experience that Mr Yemi Adatamodu has garnered as Chief Cartoonist & Corporate Affairs Deputy Manager at the African Newspapers of Nigeria (Publishers of Nigerian Tribune) coupled with his political experiences as former Local Govt Chairman and Chief of Staff to a former Governor, it is saddening that he is still naive or ignorant of the fact that when a bad advertiser markets any good no matter how beautiful such good may be, failure will be the end result.

To worsen the situation, when the market is bad as in the case of this controversial Yemi Adaramodu with a lot of albatrosses hanging on his neck, employing a deficient and insane person like Jacob Ilesanmi of the so called Sukoti family in Okemesi to package him is the most unwise decision he would do to his project.

Let us assume and not concede that Adaramodu did not employ this half baked epistle writer named Jacob Ilesanmi to package him, is it difficult for him (Yemi Adaramodu) to stop this man who is confirmed to be suffering from brain tumour from damaging people’s names just because he (Jacob Ilesanmi) wants to be seen as working for Adaramodu?

This bum called Ilesanmi Jacob has written damning things about Hon (Barr) Wumi Ogunlola, he has written libelous things about Akogun Tai Oguntayo and now he is writing libelous things about Makinde Araoye. Politics apart, through a dint of handwork these three personalities have worked tremendously & relentlessly to build their names which Jacob Ilesanmi, a nincompoop is trying, albeit fruitlessly, to destroy for political reasons.

This simply goes to say that Yemi Adaramodu is incompetent to hold the sensitive position of a federal lawmaker if he cannot curtail the excesses of his followers or better put, if he is aiding and abetting malicious, blasphemous, libelous, obnoxious and derogatory write ups against people of the same political family.

A quick check on Mr Ilesanmi Jacob revealed that he is a completely frustrated man who was dismissed from the Federal Ministry of Works about 20 years ago. His wife who is also from Okemesi Ekiti, works as a civil servant in Ogun State where she also wrongly claimed to be from Ogun State. Everybody in Sukoti family in Okemesi is tired of the destitute life that he lives. He wanders about like a lunatic writing rubbish about people right inside the toilets or inside commercial cabs. What a nonentity life!

Now will Yemi Adaramodu feign ignorant of Jacob Ilesanmi’s antecedents or that he(Adaramodu) never read all this trash being stringed by his deranged image maker? How can Adaramodu be comfortable with a man suffering from insanity melancholy to be destroying other people’s hard earned names only to be praising his own name to high heavens?

Jacob Ilesanmi whose last place of residence is at Agbado Ijaye in Lagos has abandoned his family for political harakiri in Ekiti calling people names such prostitute, Lucifer, drop out etc. Ilesanmi Jacob himself did not go to any former school neither can he defend the fake Quantity Surveyor certificate he carries about. All these culminated into his sack from the Federal Ministry of Works two decades ago. All those he is destroying have reputable family backgrounds unlike him, a nobody, who claims to be from an infamous Sukoti family in Okemesi Ekiti.

This is is just a tip of the Icebag, first of the series of revelation about the dirty pig called Jacob Ilesanmi employed by Yemi Adaramodu to destroy people around!

Watch out for the father of all revelations. This is just an appetizer, we are only waiting for him to display further malady he is known for, then he and his sender will be skinned to the bone.”