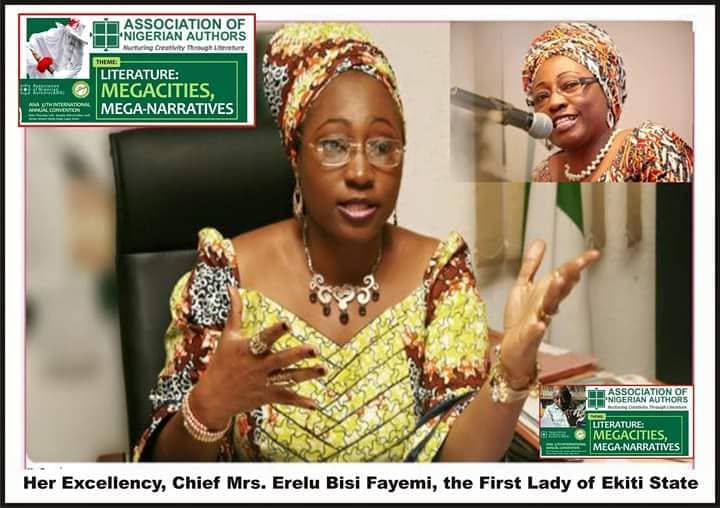 The first phase of the campaign was launched at the 36th International Convention of ANA which held in Makurdi, Benue State in October last year. Since then ANA chapters across the Federation have distributed the three children literature titles, published by the Nigerian Writers Series( NWS) an imprint of ANA, widely across schools. The books in question are Oma , the Drummer Queen, by Salamatu Sule, The Golden Girl of Galma by Kabiru Abdullahi and The Loyal Queen by Chinyere Obi-Obasi. Mrs Bisi Fayemi, a notable gender and human rights advocate in her own rights with books to her credit, has accepted to launch the second phase of the project to involve the re-publication of the same titles and more for massive nationwide distribution. She will also be delivering a good will message at the opening ceremony.
Bisi Adeleye-Fayemi (born 11 June 1963) is a British-Nigerian feminist activist, writer and policy advocate. In 2001, she co-founded the African Women’s Development Fund (AWDF), the first pan-African grant-making organisation. She serves as a UN Women Nigeria Senior Advisor, and was appointed as a Visiting Senior Research Fellow at King’s College, University of London in 2017. She is Principal Partner, Amandla Consulting, and runs an online community called Abovewhispers.com.
When her husband Dr. Kayode Fayemi took office as Governor of Ekiti State, Nigeria, she became actively involved in a range of policy advocacy, grassroots empowerment and social inclusion programs in Ekiti State. She led the campaign to enact a Gender Based Violence Prohibition Law (2011) an Equal Opportunities Bill (2013) and a HIV Anti-Stigma Bill (2014).
She serves on the Executive Boards of the African Women’s Development Fund, and the Global Fund for Women. She is Chair of the Advisory Council of the Nigerian Women’s Trust Fund and also serves on the Governing Council of Elizade University in Nigeria. She is the author of Loud Whispers (2017), Speaking for Myself (2013), and an autobiography Speaking above a Whisper (2013). She also co-edited Voice, Power and Soul.