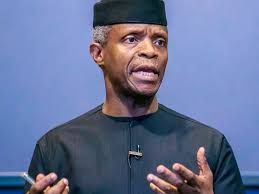 Vice President Professor Yemi Osinbajo has finally moved his political base out of Lagos to his home state of Ogun as he revalidates his All Progressives Congress (APC) membership today in Ikenne. Recall that the Vice president voted in Victoria Garden City, Lagos during the 2019 elections. Perhaps determined to carve out a base for himself, he has decided to return home.

Ogun State APC Chairman of the APC Registration and Revalidation exercise, Ademorin Kuye said at the commencement of the exercise next Tuesday, the Vice-President will be the first participant to be registered.

Spokesman to VP Osinbajo, Laolu Akande also confirmed that his principal will be in Ward One, Ikenne, Ogun State today to participate in the revalidation and membership exercise of the APC. “He will be received by Gov Abiodun and other party functionaries and members in the State” he said

Kuye also disclosed that the completion of the registration on February 13, the sorting of registration details will kick off on February 24. According to him, this gap will allow for appeals and complaints from any quarter before submitting its report to the National Registration and Revalidation committee.