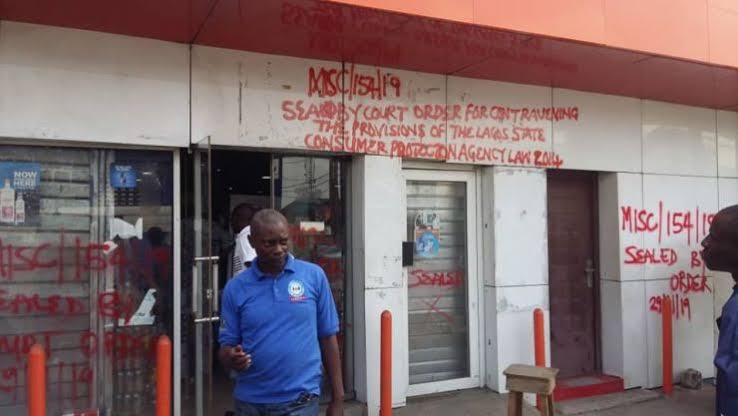 As part of the campaign to eradicate the sale of fake products in Lagos, Lagos State Consumer Protection Agency, LASCOPA, on Tuesday, sealed Bazaar Supermarket for allegedly selling expired products.

The General Manager of LASCOPA, Mr. Afolabi Solebo, in a statement, said the market was located on 31, Aromire Street, Ikeja, and was sealed for displaying expired Croaker Steak, Checkerboard Cookies, Peanut Butter and Prawns on its shelves to be sold to consumers.

Solebo stated that the monitoring and enforcement team of LASCOPA visited the supermarket on February 24, 2021, during a routine monitoring exercise when the items were noticed and the management was instructed to remove the products from the shelf but the outlet failed to comply with the directive after a revisit by the agency, insisting that such products would not be removed from their shelves until after 21 days.

The General Manager noted that the flagrant disobedience to a lawful directive from a government agency as well as the poisonous and unhealthy danger posed by consumption of such products resulted in the sealing of the Supermarket.

He said the Agency had to seal Bazaar Supermarket in the interest of the consumers in the State, adding that LASCOPA would not fail to initiate litigation if retail shops and supermarkets do not display product information on their commodities.

While charging consumers not to hesitate to report any supermarket or shops within the State where such products are sold, he enjoined residents to always ensure to check the information contained on the label of items about to be purchased.

Solebo enjoined consumers in the state no to hesitate to report any supermarket or shops in the state where expired products were sold.