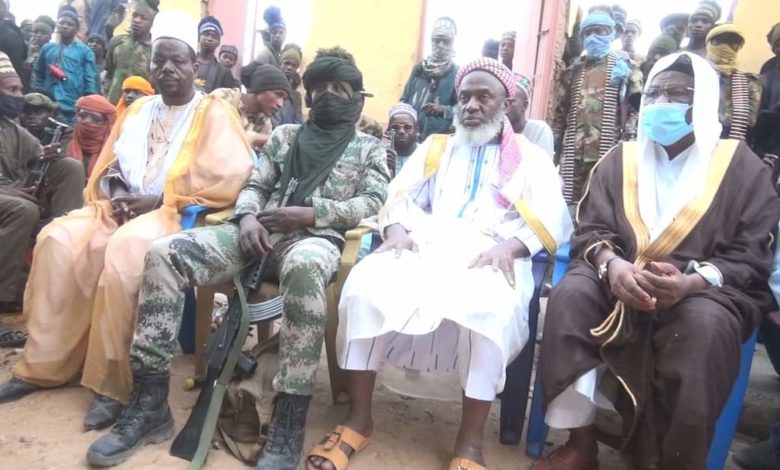 The images show combatants of the armed gangs carrying AK-type rifles, ammunition belts for machine guns and at least one rocket launcher.

HumAngle observed that the dialogue session on Tuesday, which was supposed to be about charting a path to peace and stopping the bloodshed in the region, turned out to be an avenue for the armed fighters to openly display their weapons and authority.

Although the quality of the video shared of the engagement was poor, it was still possible to observe a fighter holding a rocket launcher and two fighters carrying ammunition belts used to feed cartridges for rapid-firing automatic weapons such as machine guns.

Many of the fighters were seen with variants of the AK rifles while the leader of the gang, Kachalla Turji, had a distinct looking rifle that appeared to be the Valmet M62, a Finnish assault rifle modelled after the AK-47 assault rifle.

HumAngle learnt that the Valmet M62 has no history with any branch of Nigeria’s military or law enforcement and that the most likely source of the rifle is Libya, where it has a history and appeared after the fall of the Muammar Ghaddafi regime in 2011.

The AK-103 is another assault rifle with Libyan links that has frequently appeared in images released online by security forces.

In May 2016, the military recovered what appeared to be a Heckler & Koch G3 rifle alongside the AK-103 with a unique plastic buttstock and pistol grip.

HumAngle understands that Niger is a corridor for smuggling of contraband and arms. The country shares borders with Libya and Algeria in the north, Benin and Nigeria in the south, Burkina Faso in the southeast, Mali in the west, and Chad in the east

Other weapons visible from images over the years include craft-produced firearms ranging from AK-style rifles, break-action guns and single-shot pistols.

A small arms survey report observes that local craft firearms are frequently purchased because of their ease of access and low prices which are up to four times cheaper than their industrially produced versions.

In April 2019, an unusual discovery was made as a kidnapping syndicate was caught with AK-type rifles, muzzleloading ‘Dane guns and a CTAR-21, a compact version of the Tavor TAR-21 assault rifle popular among intelligence operatives and some military units.

In May 2019,  37 AK rifles, at least 12 craft-produced guns and one rocket launcher patterned like the Type 69 rocket-propelled grenade launcher were shown to the public by the police in Kaduna State.

The weapons used by armed groups in the Northwest seem to have diverse origins from arms trafficking and local sources, including security personnel and blacksmiths.

According to a Conflict Armament Research (CAR)  report published in January 2020, communities and armed groups use weapons derived from national, regional and transcontinental sources.

“Some of these weapons and a substantial proportion of ammunition were originally lost, stolen or captured from Nigerian national stockpiles,” the CAR report stated.

The study which covered Kaduna, Zamfara and Katsina states found that cartridges produced in Nigeria were the second and most recently manufactured ammunition in use by combatants.

Dialogue sessions over the past few years alongside weapon recoveries by the military and police have provided important insights into the profile of weapons fueling the violence and displacement of communities.