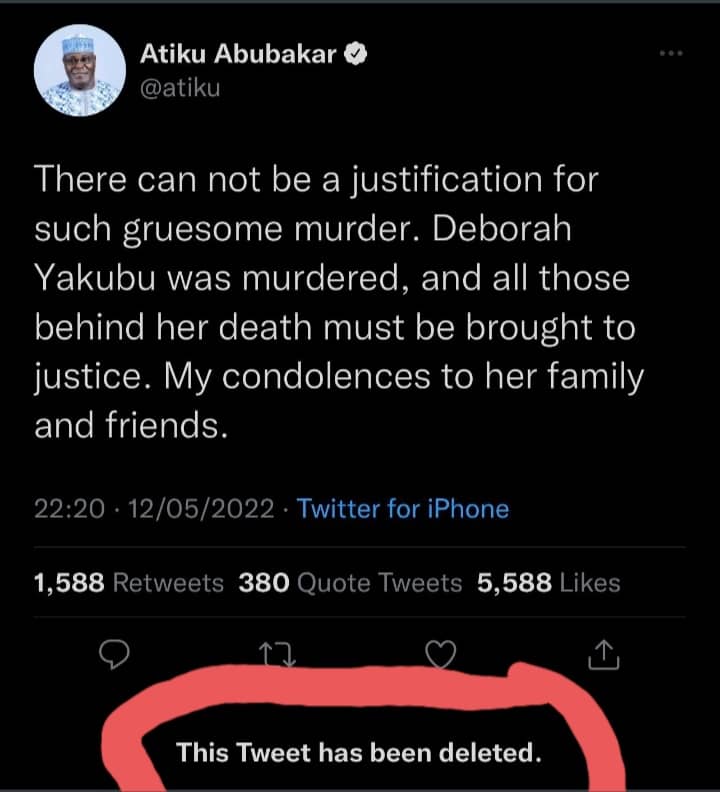 Atiku Abubakar has deleted a post he made syndicated on his Facebook and Twitter pages about slain Deborah Samuel after coming under a barrage of threats from fanatics of northern origin who asked him to forget his 2023 presidential ambition.

Mr Atiku’s posts around 10:20 p.m. Thursday were deleted less than an hour later. Both had garnered thousands of reactions within minutes, according to a screenshot taken by Peoples Gazette.

Most of the comments were from fundamentalists who warned the politician to stay away from condemning the murder of the Christian student.

“There can not be a justification for such gruesome murder. Deborah Yakubu was murdered, and all those behind her death must be brought to justice,” Mr Atiku said. “My condolences to her family and friends.”

A spokesman for Mr Abubkar did not return a request seeking comments about why he took down the post on Facebook.

Ms Samuel was murdered at Shehu Shagari College of Education on Thursday morning for allegedly posting comments that blasphemed Prophet Mohammed. The violence has elicited widespread uproar and condemnation, with Catholic priest Matthew Kukah and Sultan of Sokoto calling on authorities to immediately bring the killers to book.

Mr Abubakar is from northern Adamawa state, but continues to receive support across the country, especially amongst southern Christians who see him as a moderate statesman.