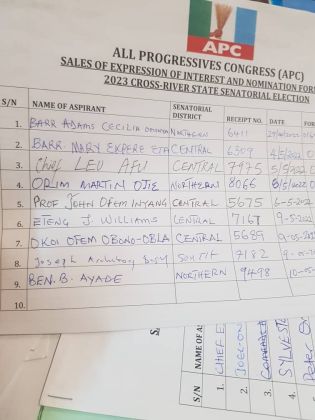 Ben Ayade, who is not too sure of his presidential ambition, days after declaring his interest to run for president has secretly purchased the APC’s Expression of Interest and Nomination Forms for the Senate and the Presidency.

His name was recorded in a registration for Senatorial Aspirants from Cross River State who had purchased the party’s forms, according to a document .

The Cross River State Governor, Ayade got the presidential Eoi and Nomination Forms of the same political party on Monday, May 9, 2022; nevertheless, it is unclear how the Governor expects to submit two forms in flagrant violation of the Electoral Act (as amended).