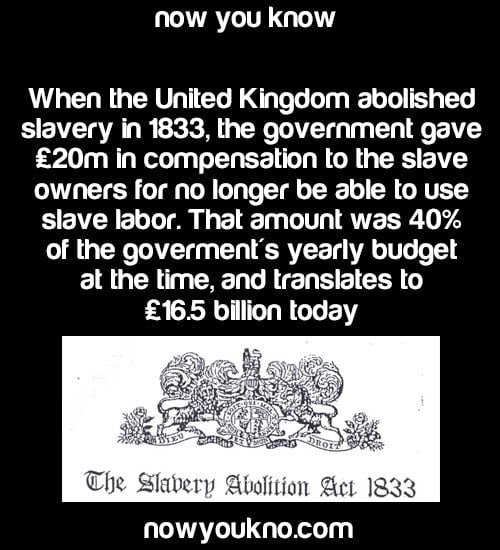 When slavery was abolished throughout the British Empire in 1833, the British government borrowed £20 million in order to compensate the slave owners. An astronomical sum at the time, this debt was not paid off until… 2015.

What this means is that practically everybody reading this paid hefty compensation to 19th century slave owners with their taxes. Including the descendants of slaves. Imagine that – paying for the emancipation of your own ancestors and the further enrichment of their oppressors with your tax. What a scam.

The largest concentration of slave owners in Britain outside of London was in Bristol. These payments helped maintain their wealth which will have been largely handed down through the generations to people who still occupy positions of power and influence in the city today.

Of course, the slaves themselves received no compensation at all when they were freed. They remained poor and under colonial rule from Britain for further generations until some of their descendants came here as a source of cheap labour for the country

And that my friends is how capitalism, the class system and systems of racist oppression are maintained through the generations and how Britain today stands on the back of the exploitation of previous centuries.

It’s also why the issues causing the present uprisings in the US are supremely relevant to us here in Britain.