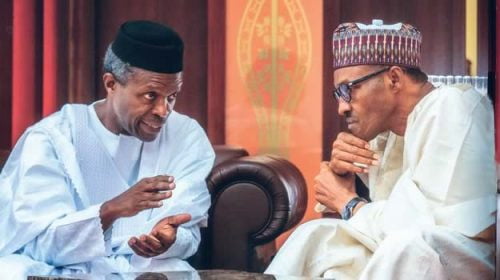 This comes following President Muhammadu Buhari’s order, asking all his Ministers vying for political positions in the forthcoming general elections to resign.

In a tweet, Sowore said. Osinbajo who is also seeking the presidential ticket of the ruling All Progressives Congress, APC should resign to allow for a level playing field for all aspirants.

The activist who had also declared his intention to succeed President Buhari in 2023, lauded the president for his action.

He said, “It is good that @Mbuhari has asked his ministers contesting elections to resign, but it is also fair, ethical and I ask that Chief @ProfOsinbajo MUST resign as well so that there is a level playing field for all aspirants”.

We had reported that President Buhari on Wednesday asked all his ministers eyeing elective seats to tender their resignation and focus on their ambitions.

The directive was handed to the affected cabinet members during the meeting of the Federal Executive Council (FEC) presided over by the President at the Presidential Villa, Abuja on Wednesday.

The Minister of Information and Culture, Lai Mohammed, confirmed it to State House correspondents at the end of the FEC meeting.