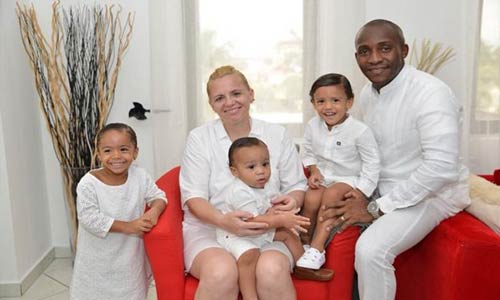 Domestic help of Managing Director of Maersk Nigeria Limited, Gilders Tahoo Tahoo has given reasons for robbing their boss leading to the death of his wife.

Two suspects have been arrested in connection with the attack on the home the Managing Director of Maersk Nigeria Limited, GildersTahoo Yahoo .

His wife, Bernadet was hacked to death while Tahoo who was stabbed several times is still in the intensive unit of a hospital.

Gilders, a Cameroonian operates an international shipping company alongside his Hungarian wife, Bernadet. The main mastermind of the crime, an electrician of Lugard Avenue,Ikoyi where Gilders resides had tricked the couple to gain access into their premises.

Two suspects were arrested by the state Commissioner of Police, Hakeem Odumosu, who visited the scene of the incident and ordered that the place be cordoned off.

It was gathered that the suspect after committing the crime took his heels, but a concerned neighbour who suspected that something terrible had happened to the family, put up a distress call to Odumosu, who ordered the Area A Commander ACP Bode Ojajuni to cordon off the area. Ojajuni, the Divisional Police Officer and their men cordoned off the area ,making sure that nobody escaped from the scene.

It was gathered that in no distance time, the CP arrived at the scene with an industrial touch which the police used to comb the area.

The efforts of the CP and his men paid off as two suspects were arrested.

Bala said that they had been moved from Ikoyi police division to the homicide section of the State Criminal Investigation and Intelligence Department ( SCIID), Panti, and that they had confessed that they stabbed the couple because they refused to assist them financially.

Bala warned people of the need to carry out background checks on hired helps.