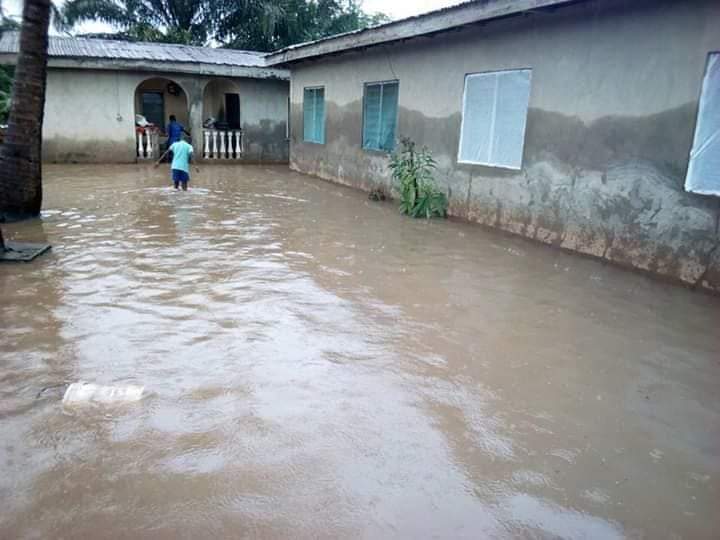 The Speaker, Ekiti State House of Assembly, Rt Hon. Funminiyi Afuye has decried the annual flooding of major streets in Ikere Ekiti with assurance that effort will be made to see that the Federal Government assist the State in combating the annual occurrence.

Rt.Hon Afuye who represents Ikere Constituency 1 at the State Assembly identified and sympathised with the people of the community over the occurrence of flood as a result of heavy downpour of rain that several properties and rendered some members of the community homeless. The rains that started on Tuesday night lasted several hours till Wednesday morning.

The Speaker, who visited some affected areas such as Oshunwemida estate, Col.(Rtd) Kolawola Adu area, behind Bovas, Kajola, NITEL junction, Anoye, Ajolagun and Magna off Moshood Road, described the incessant flooding as unfortunate, and therefore called for government intervention, to avert further reoccurrence.

The Speaker, who was accompanied by the Deputy Speaker, the Chairman of the House Committee on Environment, Hon Tunde Idowu, who represents Constituency 2 of of the community, and Hon. Adegoke Olajide, representing Efon Constituency, called on relevant agencies of government to come to the aid of those affected by the disaster across all parts of Ekiti State.

He however admonished the people living in the affected areas to always adhere to government environmental laws to avoid occurrence of such mishap in the future.

He specifically counseled against dumping of refuse on drainages and erection of structures on waterways and charged the people of the community to report anyone flouting the directive to relevant government agencies for necessary action.

It would be recalled that the Tuesday midnight rain destroyed several properties worth millions of naira and rendered many homeless in the gateway town to Ekiti State.