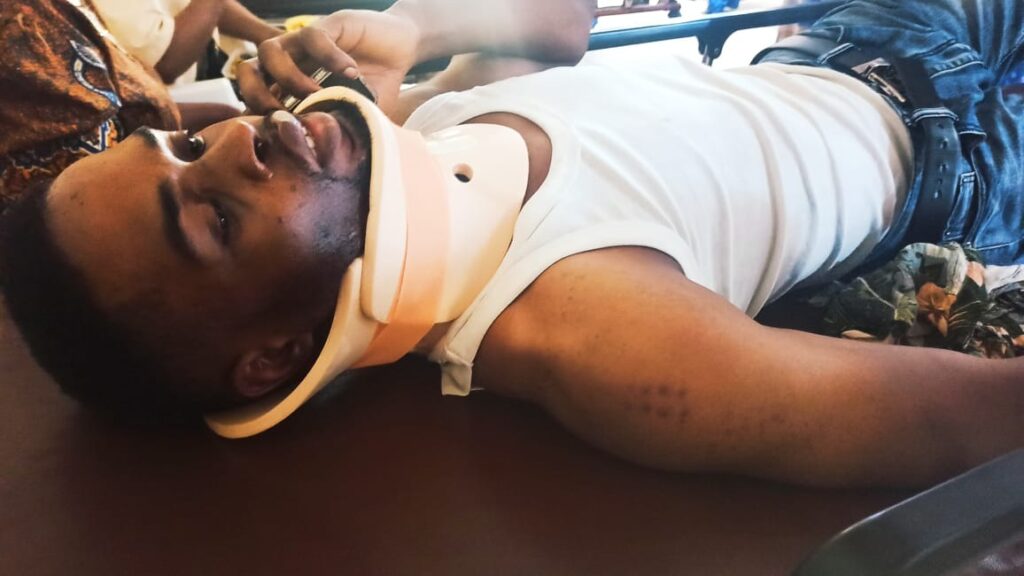 Immigration officers in Ado-Ekiti left a man battered and hospitalised after a misunderstanding with one of them.

The young man identified as Omoboriowo Emmanuel suffered a neck fracture, broken ankle, femur, toes and a dislocated arm after the encounter.

The 28-year-old man while speaking with newsmen lamented how processing an international passport rapidly turned into a near death experience.

On Thursday September 9, 2021, a 28-year-old Omoboriowo Emmanuel who hail from Ijero-Ekiti, like every other law-abiding citizen of Ekiti State, in the company of his fiancé (Tomilola) visited the Immigration Office situated at Odo-Ado in Ado-Ekiti to apply for international passport.

Emmanuel, an ICT Consultant, who is presently admitted at the Emergency Ward of the Ekiti State University Teaching Hospital narrated his ordeal to newsmen; “I had called earlier before that day to book an appointment with one of the officials of the Immigration who is helping out on some travel documents. On getting to the gate of the office complex, I was told by one of the guards at the gate house to make a U-turn and park outside the premises but I asked him why I won’t be allowed to use the parking lot, he insisted I take my car outside. I was concerned that it won’t be safe or wise that my car is parked on the road side as this is against traffic rules on that route.

“As a young responsible citizen, I wouldn’t want to flout traffic rules or be found in the wrong books of traffic officials so I insisted I was going to use the parking lot instead. Suddenly, I was surrounded by three other officers (one of them was fully armed) who started yelling at me to leave the complex. As I attempted to drive my car out, one of the officers started hitting me with his belt and even refused my fiancé entry into the vehicle. While the car was on motion, I accidentally hit two other cars at the lot due to the confrontation by the officers who eventually damaged my car.

“The three officers beat me so hard till I passed out. I was taken to a cell room afterwards where they tried to revive and so they later took me to the nearest police station as one of the officers suggested, saying, “Let us take him to the police so he won’t die here.” According to the doctor’s assessment, Emmanuel who is in a critical condition, has suffered neck fracture, broken left ankle, femur and toes, and a dislocated right arm. He has been referred to the Afe Babalola University Teaching Hospital for further examination.

Omoboriowo Emmanuel, while lamenting his situation, has demanded that justice be served and have informed his lawyer of his ordeal. “I have done nothing wrong. These officers have treated me unjustly and I want justice. Many citizens go through this horror everyday in the hands of uncultured uniform men and I want the government to proffer lasting solutions.