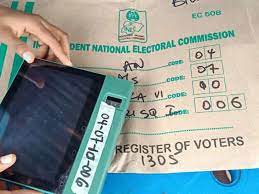 He explained that recruitment of personnel was ongoing, adding that out of the 988,923 registered voters, 734,746 had collected their Permanent Voter Cards as of June 1, 2022, representing 74 per cent while the balance of PVCs uncollected PVCs stood at 254,177.

He also stated that INEC had “taken delivery of 3,346 BVAS equipment for the election”, while provision had been factored into the release for the training and polling units in excess of 750 registered voters.

“We have sustained our sensitisation on the operations of BVAS through our various Voter Education and Publicity department programmes on sensitisation and voter education,” the REC emphasised.

Tella stated these in his paper presented during the dialogue session with stakeholders organised by a coalition of over 80 civil rights organisations under the aegis of the Nigerian Civil Society Situation Room with support from the United Kingdom Foreign, Commonwealth and Development Office which was held in Abuja.

During the event, the Convener of NCCSR, Ene Obi, said the dialogue was important because Ekiti State had a sturdy history of election violence, made even prominent since the 2009 rerun election where several voters were attacked and an INEC LGA office burnt down by political thugs.

She also said INEC would be deploying Bimodal Voters Accreditation System in a second major election since it was introduced, adding that it was important to discuss the commission’s preparation with respect to recruitment of skilled manpower, training, efficiency and deployment.

Tella said, “Recruitment of Adhoc personnel is ongoing as at present. The training unit of the Electoral Operations Department has produced a comprehensive list of all applicants on the INEC Pres for the LGAs from which the final selection is to be made by the Electoral Officers in their various LGAs.

“The total number of election personnel needed across the 16 LGAs including five per cent contingency is 10,269 based on a total of 2,445 Polling Units.”

Tella said the recruitment of the SPOs was almost completed, while their training has been completed, adding that the successful ones would soon be communicated and issued with letters of appointment.

He also said that the National Youth Service Corps remained the single largest pool from which INEC sources its ad hoc staff.

The REC said, “In Ekiti State, we have a very robust and cordial relationship with the state management and corps members. These corps members themselves have been put through the rudiments of our new technology being deployed by the commission before their training through internally organised five-week long root training conducted for them.

“Most of the trained corps members have applied through the INEC Pres portal as Adhoc Staff, such corps members will eventually be engaged once they are found appointable after our three-day training programme that is ongoing now in the 16 LGAs.”

He said INEC initially encountered little challenge convincing Ekiti State to release the public schools serving as training facilities in the 16 LGAs due to the commission’s training schedule that fell into the weekdays.