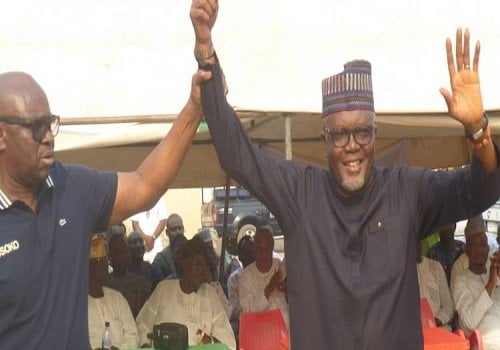 The endorsement will not affect his current position as chairman, the former governor said.

Fayose stormed the Efon-Alaaye residence of Kolawoe, who has been his ally since when he was governor, in solidarity.

He was received by the party chairman, his wife and Efon local government PDP chairman, Yemi Ajanaku.

Kolawole, a former councillor and member of the House of Assembly, was Commissioner for Environment during Fayose’s second term.

There is calm in the chapter over the endorsement. Other potential governorship aspirants, including Prof. Olusola Eleka and former Governor Segun Oni were said to be awaiting further clarification and confirmation from the party leader, Fayose.

Ekiti PDP is divided along the two factions led by Fayose and Senator Biodun Olujimi.

The court recently affirmed Kolawole as the authentic party chairman.

The Olujimi’s group is threatening to go on appeal.

The zonal leadership is planning to reconcile the two camps.

Ekiti All Progressives Congress (APC) chieftain, Chief Karounwi Oladapo, described the endorsement as “bad news for those PDP aspirants and supporters from both factions of Ekiti PDP that are clamouring for the resignation of the adopted gubernatorial candidate of Fayose and Osoko People’s Assembly, Hon. Bisi Kolawole.”

He said: “They should check the provision of the PDP Constitution and get educated.”

Oladapo, a former Deputy Speaker, added: “Bisi Kolawole remains the State Chairman of PDP until such a time the PDP headquarters releases the guidelines for Ekiti PDP primaries and until Kolawole obtains his gubernatorial nomination forms.

“Kolawole will thereafter resign a few days to the primaries in accordance with the PDP constitution. Whoever is not comfortable with the news above should seek the alternative route before its too late.

“Take advantage of the ongoing APC membership registration/revalidation to register with the APC and deregister yourself from the PDP.”