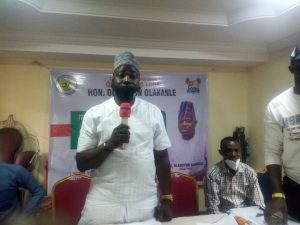 Media aides of local government chairmen in Lagos State under the aegis of Conference 57 have embarked on a crusade against fake news in their respective council areas.

Oseni Owolabi, Chairman of Conference 57, told journalists on Wednesday in Lagos that they were concerned about the menace of fake news and the dangers posed to society.

He said the uprising that attended the recent peaceful #EndSARS protest in the state was largely fuelled by the spread of fake news through various platforms.

Oseni, therefore, advised Nigerians, especially youths, to refrain from spreading fake news on social media platforms in view of the threat it posed to peace and stability.

“Our major crusade in this regard is to enlighten the masses on the negative impact of fake news across various social media platforms.

“The recent uprising in Lagos State was enabled by news stories that were diabolical, manipulative and destructive to the sanctity of our basic human existence.

“To us as mouthpiece of the grassroots in the state, we are committed to promoting policies of Lagos State in the area of orientating the masses on the need for the public to shun violence, destruction of public property and looting,” he said.

According to him, councils’ press secretaries shall engage the people  in the grassroots on the need to be  objective always on matters of national importance.

Owolabi, who is media aide in Somolu council, said it was important for people to always look at issues without attaching political, ethnic and religious sentiments.

He said that Lagos as the nation’s commercial centre must not be shortchanged, robbed of her cultural heritage and the global excellence it was known for.

“Hence, the need to encourage residents of the state to participate actively in the economic policies announced by the state governor, Babajide Sanwo-Olu, after the social unrest.

“According to the government, some amount of money has been set aside as recovery fund for those whose businesses were vandalised during the #EndSARS peaceful protests hijacked by vandals and arsonists,” he said.

Owolabi added that media aides in all the councils empathised with families who lost their loved ones during the protests in Lagos and other parts of the country.

He said that the state was committed to getting justice for victims of police brutality and alleged atrocities of SARS operatives.