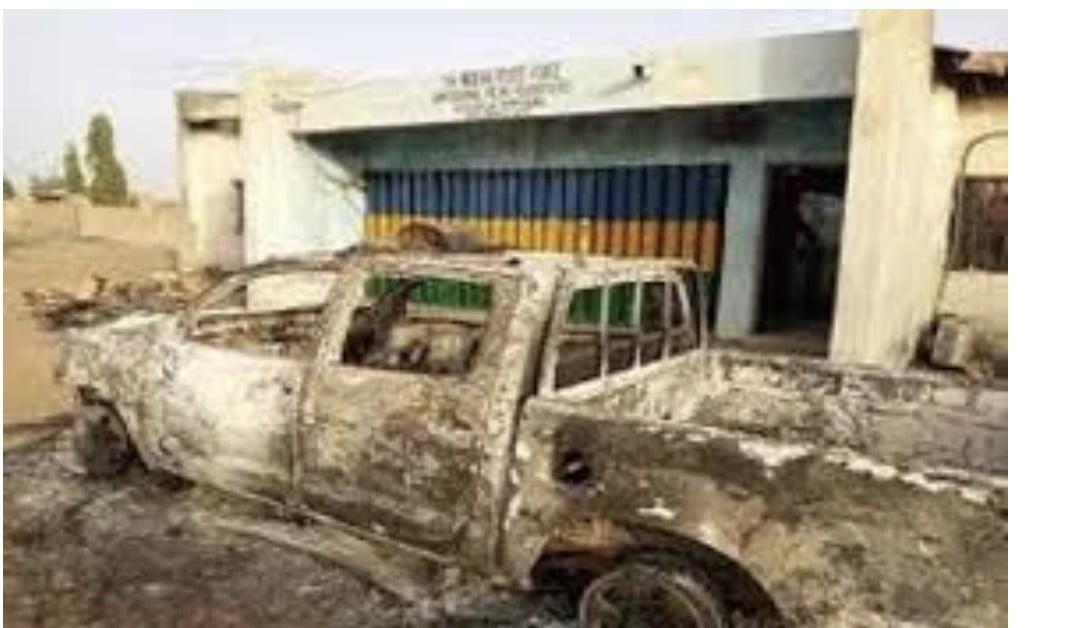 Following violence that trailed the #EndSARS protests, the Lagos State Government and the state police command have begun to count their losses.

Hoodlums who took advantage of the protests had carried out wanton destruction of government and private properties, setting them on fire while carrying out acts of looting.

On Friday, the state government said 80 Bus Rapid Transit vehicles were burnt by hoodlums in the Oyingbo and Ojodu Berger areas of the state.

The state Commissioner for Information, Mr Gbenga Omotosho, in an exclusive interview, noted that 27 of the destroyed BRT vehicles cost $200,000 each, while 57 of them cost $100,000 each, all totalling about N3.9 billion.

This is just as the state Police command said that a total of 25 police stations were attacked and razed by hoodlums amid the protests.

Other police stations that were vandalised but not burnt were Ojo, Ojodu, Mowo, PPL and Morogbo.

Speaking on the BRT vehicles which were razed, Lagos State commissioner for Information and Startegy, Mr. Gbenga Omotoso, said some suspects had been arrested by the police.

He said, “As I speak, the governor and some of us are going round the state from one facility to the other. We are also visiting private facilities. Some of the places were the Oregun Vehicle Inspection Service office, the BRT park at Oyingbo and the terminus at Ojodu Berger.

“I don’t know how they planned it; the hoodlums left the old buses and went for the new ones. The new ones were worth billions of naira. We have 23 big and 57 medium-size BRT buses affected by the violence. The 23 buses were at Ojodu and the 57 were at the Oyingbo area. The big buses cost around $200,000 each, while the medium-size ones cost around $100,000 each. As you know, we bought them in dollars.

“The losses incurred by the state are not ready yet. But it will be mind-boggling. It came on a scale beyond belief. We know that the police have apprehended suspects.”

Meanwhile, the state Police Public Relations Officer, SP Muyiwa Adejobi, said over 100 hoodlums who participated in the arson and looting of the police stations, as well as the sacking of banks and malls in the Lekki and Surulere areas, had also been arrested by the command.

Adejobi noted the suspects might be paraded before journalists on Saturday (today).

He said, “On Thursday, the hoodlums still burnt Ikotun, Ojodu and Bode Thomas divisions. In the affected stations, the command has asked police personnel to report to their various area commanders. We lost four personnel including an assistant superintendent of police. Over 50 policemen were injured and on admission. The injured include about five divisional police officers. It was a serious wave of attacks.

“We have arrested over 100 suspects and they are likely to be paraded tomorrow (Saturday). Some of the thugs went to loot the banks on Admiralty Way, Lekki. We recovered guns and cash from them. The thugs had shared parts of the money but we were able to recover some from them. We will parade them so that Nigerians will know that they were not protesters.

“They were arrested by the police operatives attached to Area J, Ajah; Area B, Bravo; Area C, Surulere; Area A, Lion Building; Area G, Ogba; Area F, Ikeja; and from Area K, Morogbo. The arrests were coordinated from area commands.”

“But the hoodlums collected some rifles from policemen; we have been able to recover some of the rifles with the help of the communities. We are still looking for maybe one or two rifles. Before the attacks, we also took steps to preserve the exhibits for prosecution.”

A DPO in one of the burnt stations, who spoke on condition of anonymity, said he and his men were nearly cut in the crossfire.

He said, “The hoodlums attacked the station in large numbers and almost overrun us. We initially tried to contain them but we discovered we could not. They set the station ablaze and blocked the entrance to the station. We had to use our firearms justifiably to escape from the station. It was a terrible experience.”

Meanwhile, the Oyo State Police Command, on Friday, also confirmed that it had lost five officers to the mob attacks occasioned by the #EndSARS protests in the state.

The Police Public Relations Officer in the state, Mr Olugbenga Fadeyi, said, “We lost five policemen altogether. We lost three at Ojoo Police Station and we lost two at Iwo Road on Thursday.

“I cannot say anything about the number of guns we lost in Ojoo because everything is scattered now. We are still working on it and I can’t say if some of the guns have been recovered.”

The Commissioner of Police in the state, Mr Joe Enwonwu, had, on Thursday, raised the alarm that the looting of police armoury could negatively affect the security situation.

Meanwhile, the Rivers State Police Command said members of the Indigenous People of Biafra were responsible for the killing of two policemen and burning of two police stations in Oyigbo Local Government Area during Wednesday’s attack.

In Enugu, the police decried the killing of their men, burning of two police stations and operational vehicles by criminals who hijacked the protests.

The police have commenced an investigation into the #EndSARS protests and the violence and arson that followed the demonstrations leading to the destruction of properties and loss of lives.

The Inspector General of Police, Mohammed Adamu, stated this on Friday, while receiving the House Committee on Police Affairs at the Force Headquarters, Abuja.

The committee members, led by the Chairman, Usman Kumo, were at the Force Headquarters for assessment and to offer advice on the ongoing reforms of the Nigeria Police Force and efforts at restoring normalcy to areas affected by violence arising from the #EndSARS protests in some parts of the country.

This was contained in a statement by the Force spokesman,  DCP Frank Mba, titled ‘IGP, House Committee on Police Affairs meet on ongoing police reforms.’

The IGP said the Force had commenced a comprehensive internal review and evaluation of the circumstances that led to the protests and the violence, fatalities and damage to critical infrastructure.