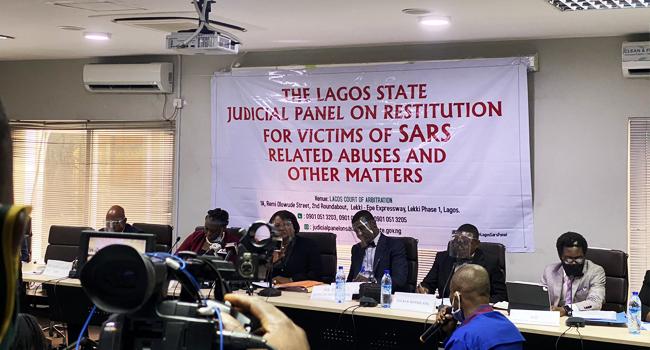 Loatsad Promomedia Limited, an outdoor advertising company, owned by Seyi Tinubu, son of the National Leader of All Progressives Congress (APC), Asiwaju Bola Ahmed Tinubu, on Saturday testified before the Lagos State Judicial Panel on restitution for victims of SARS related abuses and other matters.

Loatsad Promomedia had been in the eye of the storm following the October 2020 incident at Lekki tollgate, in which the company was accused of deliberately switching off lights to pave the way for shooting of harmless protesting youths.

The company secretary of the Loatsad Promomedia, in the testimony before the panel, stated that the company through the head of human resources directed members of staff to shut down all it’s billboards in Lagos State before 3pm and vacate sites to enable them get home before 4pm which was the commencement time of the 24 hour curfew imposed by the Lagos state government on the 20th of October 2020.

“Thus, the only staff of loatsad promomedia limited on ground at the Lekki tollgate plaza was the man in charge of the generator who turned off the billboard and left for home at 3pm according to the head of human resources directives,” the company secretary said.

According to Loatsad promomedia limited company secretary, the company is the owner of the billboard situated atop the Lekki tollgate booth at Admiralty way, Lekki and based on the directive of the head of human resources, the billboard at Lekki tollgate plaza was turned off at 3pm just like for it’s other billboards at Falomo, Isolo, Surulere and Ikoyi.

Earlier on, the witness had informed the panel that due to Covid-19 pandemic in 2020, the company’s operations were adversely affected as most members of staff worked from home, save for some operations staff who went to locations only when their attention were needed.

The witness also stated that due to the pandemic, the company’s billboard operated for about 12 hours in a day in some locations based on an arrangement between the company and it’s client and at other places, it was shut down due to the lockdown since people who are the target of the billboard have been restricted from moving about.

Under cross examination by the LCC counsel, loatsad promomedia limited company secretary said the company is a private entity and is in no way related to Lekki Concession Company (LCC).

He also said the protesters approached to make use of the company generator to power the DJ and his equipment, that the company obliged but when they could not get cables to connect the generator because of the distance, the organizers sourced for their own source of power supply.

The witness stated that the company facilities were vandalized as cables and batteries were stolen of which the company lodged a complaint at the Nigeria police force Maroko division which investigated the crime and arrested some culprits.

Under cross examination by Mr A. J. Owonikoko (SAN) counsel to Lagos State government, the witness stated that the shutting down of it’s billboards all over Lagos State including the Lekki tollgate plaza was as a result of the imposition of curfew by the Lagos State government, because doing otherwise would have meant keeping some staff on ground which will have amounted to violation of the curfew with it’s attendant consequences.

When asked how it expected it facilities to be protected in view of the imposition of curfew, witness said the company expected the state to do that, but unfortunately it’s facilities were vandalized and materials stolen.

On the relationship between loatsad promomedia limited and Lekki Concession Company (LCC), the witness said the only relationship that existed between both entities was a business relationship.

The panel adjourned the matter to 17th August 2021 for further hearing.