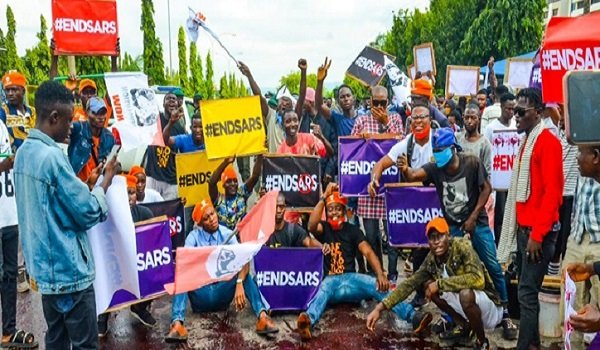 Another protester was killed in Akure when a car rammed into protesters also on Friday.

But it was the other way round at Ikola, a Lagos suburb, on Thursday when a suspected protester smashed her car into a tricycle, killing two of its occupants.

The police said the suspect’s driving was reckless. Several people were injured in the three incidents.

was particularly intense on the Lagos/Ibadan expressway where the protesters blocked the road to traffic, and Abuja where youths barricaded the Abuja city gate and the airport road, leaving motorists and commuters in severe agony.

Elder statesman and Senior Advocate of Nigeria, Afe Babalola, called for an immediate dialogue between the federal government and the youths with a view to finding a solution to the lingering crisis.

He warned that delay in resolving the issue on time could be dangerous.

And the man who was instrumental to the setting up of the now disbanded anti-robbery squad in 1984, Mr. Fulani Kwajafa, says he now feels “sad” and “guilty” about what the agency turned out to become.

“SARS of today is not the same SARS I established in 1984,” Kwajafa told the BBC.

One of the Benin victims, identified as Ikpomwosa, was shot. The name of the other victim was not immediately available. He was macheted.

The hoodlums, who were mostly in red tee-shirts, struck at Ring Road, close to the Oba of Benin Palace.

Eye witnesses said the hoodlums claimed the protesters prevented them from making money from their daily issuance of tickets to commercial drivers.

The other protesters scampered to safety and then regrouped and continued moving round Benin and its environs.

They terminated the protest at Government House.

We gathered that injured protesters were treated at the nearby Edo State Government-owned Central Hospital, Benin.

One of the protesters, Efosa Igbinoba, said: “We started the protest from Sapele Road, Benin, but on getting to Ring Road in the state capital, hoodlums suddenly appeared with cutlasses, guns and other dangerous weapons and they attacked us, thereby disrupting the protest, but we quickly regrouped.

“We are demanding police reformation. We are undeterred. We will continue with the protest, until the police are reformed.”

A furious Governor Godwin Obaseki condemned the attack and charged security agencies to ensure that protesters were adequately protected.

He said: “I have just learnt that hoodlums have attacked #ENDSARS protesters, who have conducted themselves peacefully in Benin City. I extend condolences to the victims of the attacks, including those who lost their lives and others who were injured by the thugs.

“It is disheartening that anyone would attack a peaceful assembly of young people who are expressing genuine concerns over police brutality and intimidation in their own country.”