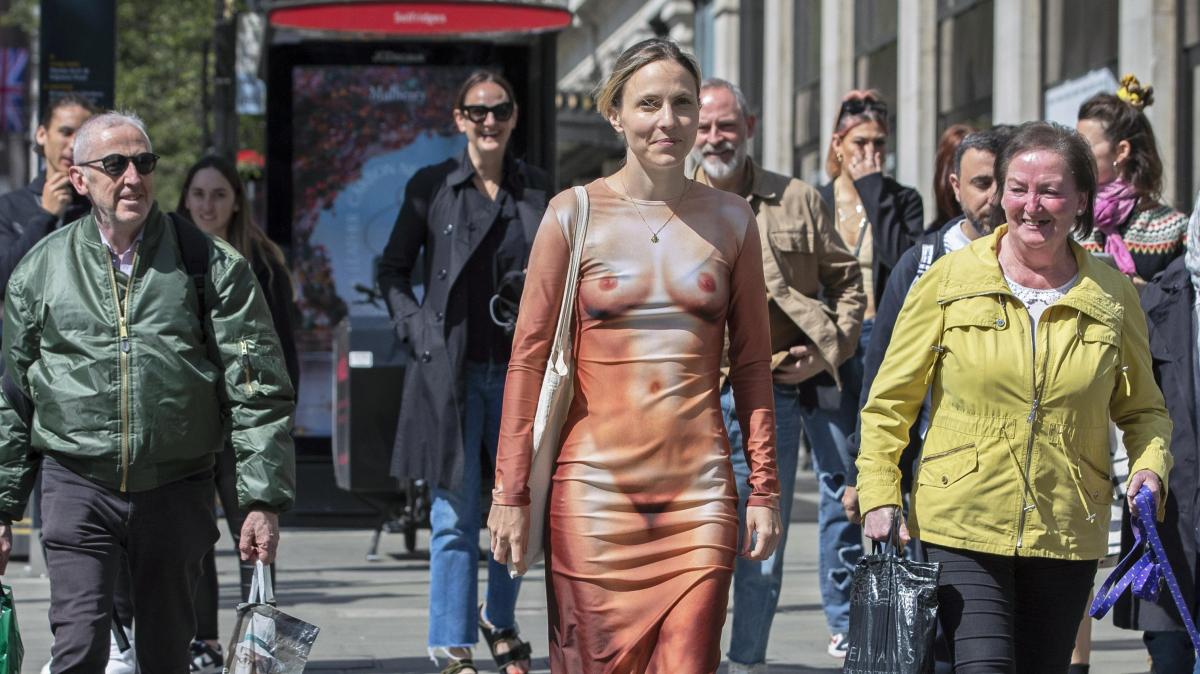 John Lewis is a safe space for Britain’s middle-class shoppers, but one woman is visibly rattled when we cross paths in the perfume department on Thursday. “You gave me a fright,” she says, sizing me up and down. “It’s quite scary.”

This is hardly the reaction I’d hoped for when I wiggled into my £515 Jean Paul Gaultier “naked dress” hours earlier. The skintight, skin-toned new It-dress depicts a woman’s naked body in realistic three dimensions — both front and back — and immediately sold out online when it was released last week.

“It’s too much for me, personally,” says the shaken fifty-something shopper, who lives near Basingstoke. “You wouldn’t see anything like that in Hampshire.” An elderly man who mutters “disgusting” at me disappears into the shop’s basement, heading towards kitchenware, before I can grill him further.

Keen for a celebrity appraisal, I accost the actress Zawe Ashton, who is engaged to her fellow thespian Tom Hiddleston, whom I spot browsing in the menswear section. “I couldn’t approve of it more. You look fabulous,” she says. “I love the self-expression and that you’ve just paired it with casual [accessories]. I saw you and thought, ‘Yeah, that’s an invitation to be more me the next time I go shopping in John Lewis.’”

At opening time on Oxford Street that morning, I managed to bag one of the few remaining naked dresses in Selfridges. “It’s not an everyday dress, it’s more occasional,” observed the shop assistant with delightful understatement.

It is part of a collaboration, launched last Monday, between Gaultier, the French designer who remains fashion’s “enfant terrible” aged 70, and Lotta Volkova, an edgy Russian stylist, 38. By Wednesday, the dress, which is 80 per cent polyamide and 20 per cent elastane, was out of stock online. Tops in the same head-turning style and “naked” bikinis are also for sale. The items rely on trompe l’oeil, a technique beloved of Gaultier in the Nineties, which uses realistic imagery to create optical illusions.

Barely-there fashion and so-called naked dresses are back on trend. At the Met Gala in New York this month Kim Kardashian appeared in the nude rhinestone dress which Marilyn Monroe wore when she sang happy birthday to John F Kennedy in 1962. “In a sense, it’s the original naked dress,” she said. At the same event, British supermodel Cara Delevingne forwent any top at all in favour of gold body paint and nipple covers.

Gaultier’s designs have been worn by everyone from Madonna to Rihanna, but, heading outside in my birthday suit dress, I can’t help thinking of those naff aprons adorned with Michelangelo’s David statue. “That dress really brings out your eyes,” says a man with a wolfish smirk.

On Oxford Street, the reaction as I head to a photography exhibition is more positive. Women of all ages give me the thumbs up, smile and shout that I’m brave. “Brave” is one word. Strangers try to sneak subtle photographs with their smartphones, making me feel like a Z-list celebrity. “In my day, you’d be slaughtered wearing that,” says Sadie, 73, who stops me for a better look. “But I get that times are changing.”

When women’s bodies are, once again, a raging political battleground, and there is a real possibility that America’s 1973 Roe v Wade abortion Supreme Court ruling could go up in flames, it feels strangely empowering to confidently walk around the capital in the dress, (replica) nipples out, head high. Karen Davidson, a creative director, applauds my “killer dress” for “celebrating the female body”.

A friendly quip lobbed from a pub terrace brings me back to earth. “Your nipples don’t line up,” shouts Julie Walton, who is visiting London from Doncaster with friends to watch Tina: The Tina Turner Musical. She’s right — the dress’s nipples are inches higher than my own.

“I certainly wouldn’t want my daughter walking the streets in it,” says Walton, 62. “I find it offensive. I can cope with the boobs. I can’t cope with the hint of pubes.” The three men in the group peer into their pints silently. “I think it’s well covered-up for Doncaster, to be fair,” adds Wendy Shaw, 58. “You’d be overdressed there.”

Heading home alone after the male photographer has left, some men are more vocal. “It’s for my eyes only, yeah?” says one suited bloke in Tesco. I oblige when laughing builders ask for a photo and flash a big smile at a street preacher who’s clutching a “Jesus Christ is the only highway to Heaven” sign.

When one little girl, walking with her parents, keeps her distance from me, it feels like we’re enacting a modern version of Hans Christian Andersen’s The Emperor’s New Clothes. I get snapped by a wily paparazzo outside the Chiltern Firehouse hotel and, to my horror and my friends’ hilarity, quickly become a story on MailOnline and in The Sun.

Safely back at home, it’s time for shepherd’s pie and book club. Did Gaultier dream of the dress accessorised with oven mitts and Marigolds? My first friend arrives: “I didn’t realise the Naked Chef was hosting.”

BBC documentary about IPOB’s disinformation network has been published. Watch here
‘Every time Sir Keir is asked about his historic curry he says that this isn’t what people want to be talking about. Fine. What about cost of living crisis. Ah, what a silence is there…’- Douglas Murray