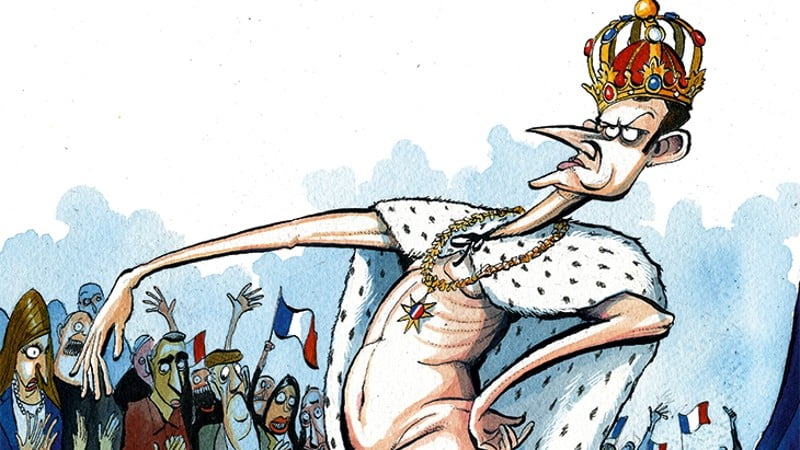 May 5th this year will be the two hundredth anniversary of Napoleon’s death on Saint Helena, the tiny island in the south Atlantic where the British confined the Emperor to Longwood House after defeat at Waterloo in 1815. After much hesitation, Emmanuel Macron has decided that France will commemorate the Emperor’s place in French history.

Though the most recognisable historical figure in all surveys of the French, almost no public spaces or institutions bear his name. Monarchy and Republic cancelled him. Bonaparte divides. He is at once the figure who tamed the Revolution, drastically reformed France and yet the dictator who overran Europe and reinstated slavery. President Jacques Chirac abhorred him, and in 2005 refused any state celebration of the 200thanniversary of his greatest military victory at Austerlitz.

Which aspects will Macron choose to highlight? Given the state of his France and Europe the enterprise is not without risk. Parallels between the two men have become a cliché since Macron’s election to the Elysée four years ago. Other than their supposed small stature (erroneous, both being average heights for their times, Napoleon five foot seven, Macron five foot nine), it is the Olympian style of government that draws them together.Macron is seething at Britain not collapsing after Brexit, consumed with jealousy at Britain’s vaccination roll-out and bitter at Britain’s early discovery of a vaccine

Bonaparte ruled France, and then Europe, by conflict and audacious fiat. No sooner had Macron’s decision been made to commemorate the Emperor, than he was drawing virulent criticism for his Jupiterian decision – and humiliating climb-down – on 31 March to impose a third lockdown on France for at least a month. This he had repeated would not happen, rejecting in January his scientific committee’s advice that without lockdown a third wave would hit France in March. France, he had insisted, would be saved by vaccination, notwithstanding its sloth-like roll-out.

The leader of the Rassemblement National, Marine Le Pen – his likely rival in the second round of the 2022 presidentials – referred this week to the humiliation as Macron’s ‘vaccine Waterloo’, doubtless hoping he will meet another in a year’s time. Meanwhile Macron, the compulsive gambler has placed another bet on France partly re-opening by mid-May, coinciding with the Napoleon commemorations. Perilous as it may be to use history for political ends, it is a French reflex.

Bonaparte placed members of his family, or trusted generals, on the thrones of European states he conquered to execute his policies across the continent. Macron was able to place Thierry Breton, former minister and head of the telecoms giant Orange (ex France Telecom) as Commissioner for the Internal Market in Brussels. Like Bonaparte’s family across Europe attempting to uphold the progressive collapse of the continental blockade imposed by the Emperor against Britain, so Breton has been pursuing a propaganda campaign and relentless battle against AstraZeneca, with dawn raids on factories (none of which have found anything untoward) to discover how Britain’s vaccination roll-out can have been so successful if London is not running the blockade on vaccine exports. An indicator of where Breton’s real sympathies lie was his inability to contain that compulsive French historical reflex, when he declared that all Europe would be vaccinated this year by….14 July.

Just as Napoleon had a British obsession, so does Macron. He is seething at Britain not collapsing after Brexit, consumed with jealousy at Britain’s vaccination roll-out and bitter at Britain’s early discovery of a vaccine, while France suffers humiliation, not least among her own media, as the only permanent member of the UN Security Council not to have invented one.

It is instructive how Macron’s speeches, to the point of circumlocution, avoid citing Britain when referring to examples of successful vaccination. His lieutenants, like the junior Europe minister, however, show no restraint in spilling the dirt. With AstraZeneca as the trope embodying vaccine and post-Brexit success, it cannot be seen to triumph. Just as Napoleon obsessed about the British shopkeeper as symbol of her commerce, so Macron has it in for AstraZeneca and its ‘quasi-ineffective’ product. Only this week, France’s junior industry minister triumphantly announced that by the second semester France will be able to do without the AstraZeneca vaccine.

In January 2022, France will assume the presidency of the European Council and Macron will reign directly over Europe. Theoretically it is for six months, and the UK can expect a rough ride. But the small matter of the French presidential elections in April-May 2022 will decide whether Emmanuel will still be at the helm on that fateful day of 18 June when 207 years previously the French Emperor met his demise on that ‘gloomy plain’ just ten miles from Brussels.