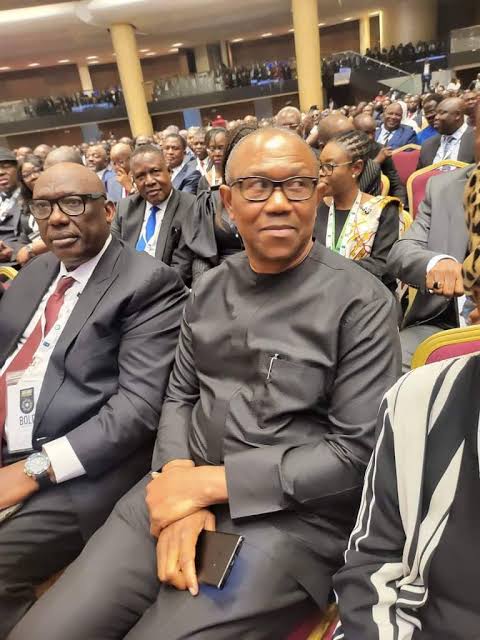 The Peter Obi phenomenon seems to be losing steam as the days go by. The recent outing at the Nigerian Bar Association Conference in Lagos buttressed this point. He is an intelligent chap. He plays the mind game to those that have elected to be gullible. He churns out facts and figures by impulse. And as usual, he gets cheered not for the veracity of the claims but for his ability to articulate his views on crucial issues.

We had expected so much from Peter Obi at the NBA conference. However, he was wise to realize that his audiences are not market women and the unenlightened who would take anything he says hook, line and sinker. This time, he was dealing with learned fellows who would stop at nothing to verify postulations.

This was unlike the Peter Obi. We expected that much vigour that has characterized his public outings. And that begets the question of why he was afraid to mesmerize his audience in his characteristic manner. Maybe he ran out of ideas. Perhaps he realized that his audience was not the social media fanatics that jumped at everything blindly.

These are indeed interesting times in Nigeria. I stand to be corrected; Peter Obi does not have what it takes to rule Nigeria. There isn’t much he has to offer besides rhetoric, grandstanding and insinuations. Aside from these, nothing is left in the Peter Obi bubble that will burst soon because it is not sustainable.

That reminds me. I stumbled on a post on his outing at the NBA conference. Please permit me to reproduce verbatim: “He claimed that 60% of Nigerians are supposed to be employed (120M). Nigeria Demographics shows that only 44.74% of Nigerians are between the age of 20-65years that is 90 million. A substantial part of the children between the age of 20-25 years (9.57% about 19 million) are in school; so how did he get 120 million Nigerians that are qualified for employment; is it that he has counted those underage children he is employing as a trader instead of allowing them to go to school? Peter Obi lied”

“The unemployment rate today in Nigeria is 33.3% (~30 million) out of an employable population of 90M (44.74%). 44.74% of Nigeria’s population Demographics by age distribution are between the ages of 20 – 65. 66.7% of that spread is 60 million, which aligns with employment data released by NBS. So, where did Peter Obi get his figure that 72 million Nigerians are unemployed? Another Peter Obi lie.”
“Peter Obi claimed that our daily production for July is 1,073,000 barrels per day, but OPEC figures confirmed production output from Nigeria as 1,183,000 barrels per day. Where did Peter Obi keep the additional 110,000 barrels per day? Another Peter Obi lie.”

A fascinating one, and maybe he should devise the silence is golden approach moving forward at the risk of getting burnt. I wonder what runs through his mind whenever he reflects on some of the half-truths he churns out. Does he laugh about it, or does he feels remorseful? Whatever the case, he is getting it wrong on all counts. Sometimes I can’t understand his desperation and the subtle attempt to disassociate himself from the PDP years.

The only thing we hear is that I did this and that when I was governor of Anambra state. Yes, he brought his stooge to succeed him as governor. And the rest is history. He is a one-person army, and I wonder how he intends to achieve anything meaningful because he seems to be the all-knowing type. I am not convinced Peter Obi is what Nigeria needs at this critical point of our existence.

He has not articulated how he intends to take the country out of the doldrums. Instead, he has busied himself with facts and figures that are, at best, his imaginations. We must ask critical questions beyond the social media frenzy that he has created. And he missed that golden opportunity at the NBA conference to stamp his authority. However, he missed it because he lacked substance.

I must reiterate that Peter Obi is far from being a visionary leader. He is still living in the past and one who wants to take all the glory in his self-seeking enterprise. But I am glad that Nigerians are beginning to see through his gimmick. I trust that in the days, weeks and months ahead, Nigerians will finally come to terms with the Peter Obi distraction. He doesn’t have what it takes to lead Nigeria.

My candid advice for him is to concentrate on convincing people to buy his goods and leave the business of governance for it’s a different ball game. At least, he should spend considerable time rebuilding his business empire. I can’t but thank God for the NBA Conference. A word is enough for the wise.