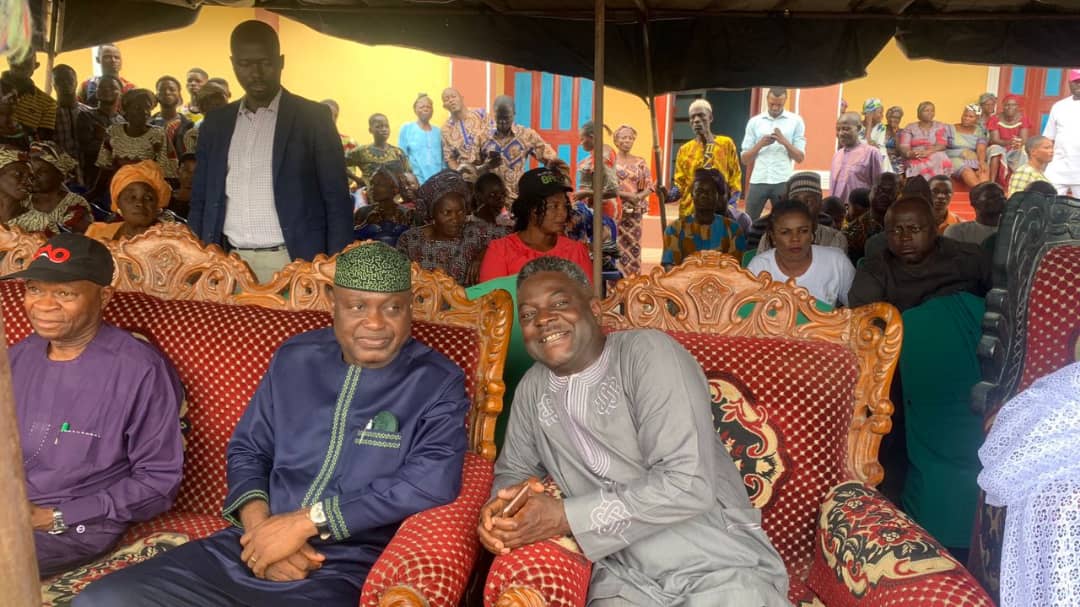 The Ekiti State’s succession jinx is finally doomed and the ashes of the spell interred in the bowel of its doomsday June 18, 2022 poll verdict. In an unmistakable bang,  the eddy of regimental succession blackout has been unbundled and shattered by the furious thumbs of foresighted Ekiti voters that have since been hungry for the sustenance of development strides midwifed by Governor Kayode Fayemi between 2010 and 2014,  before the outage between 2014 and 2018 reversed the Fayemi-inspired fortunes. Now that the succession current flows and the tide is smooth, inspiring rank fortunes must of necessity set sail through the canvas of June 18 political duel to set Ekiti State on the interminable voyage to self-redemption.

As the June 18 poll did the magic, it was indeed a masterful summary arrest of growth arrester that had stalked Ekiti State since democratic governance berthed in 1999 in the Fountain of Knowledge founded on the Land of Honour.

Fayemi, a legacy governor and visionary of no mean depth, has set the records, breaking the unedifying cycle of power rotation bug between the earnest visionaries and vicious potentates whose creed is the beatification and canonisation of genteel poverty sainted and scented in “suffering and smiling”, as a way of life. For the latter, to be ungenteel is far worse than to admit failure in their development strategies.

In the sustained thirst for unbroken governance  process for development, the governorship candidate of the All Progressives Congress (APC), Biodun Abayomi Oyebanji (BAO), in the manner of John the Baptist, bore the torch of Fayemi’s visionary leadership and rang the bell of redemption, quixoting in the scintillating slopes and luscious hills of Ekiti landscape to seek the approval of Ekiti people to make him the captain of the political missioners that will shape the fortunes of the state for good.

Oyebanji’s political bible of six chapters in his mission is in form of a six-point agenda incorporating Job Creation; Human Capital Development; Agriculture and Industrialisation; Arts, Culture and Tourism; and Governance.

His priorities include growing the economy and creating jobs for youths; investing in human capital development required to safeguard people’s lives;  completing strategic infrastructure projects in transport,  agriculture and power projects to improve quality of life; and making the state competitive for businesses of all sizes while also providing a conducive environment and sustainable welfare package for workers, retirees and traditional institutions.

In Youth Development and Job Creation scheme, Oyebanji promised during campaigns to exploit his initiative in four major areas of emphasis. These include developing Ekiti Knowledge Zone to ensure broadband connectivity within five kilometres of every location in Ekiti State, concluding Special Economic Zone status for Ekiti Knowledge Zone to deepen attractiveness to investors and attracting critical mass of technology companies to the zone.

Microfinance and Enterprise Development Agency, according to him,  will be restructured into public-private partnership with the government providing seed funding to ensure adequate access to finance medium and small scale enterprises while vocational training, incentives, and reward schemes for value-creating industries to encourage better loan performance and business growth would be provided.

Others are strengthening collabotation among the state’s tertiary institutions by optimising the Ekiti Regional Education Network and introducing coding camps and classes  in primary and secondary schools across the state.

The goal in Human Capital Development, he said, is to provide quality education with foundation required to build successful lives and ensure access to affordable and quality health for all and to protect poor people while water and sanitation services would be provided to improve hygiene for all.

To achieve this, Oyebanji assured that he would continue Fayemi’s free and compulsory education up to SS3, improve learning environment and deepen the use of Internet while teaching staff would be motivated to improve  learning and outcomes.

He added that health insurance scheme would be provided to guarantee access to basic health care, even as hospitals renovation would continue while practice standards would be set across the hospitals.

The social investment component, according to him, will emphasise partnership with the civil society and social enterprise to deliver sustainable solutions to community needs while investments will  be made  in programmes, infrastructure and human capacity for the welfare of the elderly people and people living with disabilities, including strengthening the existing laws to protect vulnerable people.

Water and sanitation schemes, he promised,  would be enhanced  to ensure access to safe water supply, including encouraging private sector and community initiatives to encourage delivery of sustainable water and sanitation services to reduce hygiene-related sickness and mortality, while Egbe and Ero dams would be optimised to supply water across the state.

In his Agriculture and Rural Development plan, Oyebanji said his goal included developing rural communities, supporting farmers and improving productivity in agricultural sector. He is to achieve this by creating Special Agriculture Processing Zone with focus to provide infrastructure for agribusiness; enhance all the dams in the state and support the development of pipeline infrastructure for irrigation coverage within the zone; and provide incentives that will encourage establishment of agricbusiness factories across the state.

In the rural development component, Oyebanji planned to embark on rural roads covering 500 kilometres of farm roads, all completed by 2024, while cooperatives and associations would be strengthened to improve productivity in cassava, rice, cocoa, cashew, maize, yam and vegetables.

According to him, communities will participate in budget and planning processes that inform the implementation of community-led projects while Ekiti State Community and Social Developmemt Agency ( EKSCIDA) will be empowered to implement projects that enhance the socio-economic status of suburban and rural communities.

According to the blueprint, Oyebanji’s goal in infrastructure and industrialisation is to deliver new and ongoing projects that will increase power supply and extend and maintain the state’s transportation networks; deliver selected intercity roads for phased rehabilitation, including strengthening the capacity of the Public Works  Corporation,  to maintain all state roads and deliver selected intercity roads that connect major towns and boost commercial activities; and commence full passenger and cargo transportation at the new Ado Airport.

The power infrastructure is part of the bargain with emphasis to deepen Independent Power Projects to cover  both industrial and knowledge zones while mini- grids will be developed to ensure power supply to unserved and underserved communities, even as his administration will collaborate with the Federal Government  to complete the Ilupeju  and Ijesa-Isu substations and 132/33KV transmission lines to increase electricity supplied to Ekiti State.

In his Arts, Culture and Tourism policy, Oyebanji’s goal is to develop the state’s tourism industry by investing in the state’s attractions, cultural endowments and assets.
To achieve this, he plans to designate the Ipole-Iloro-Ikogosi corridor as a Special Tourism Zone, including providing security, infrastructure, power and broadband within the Zone and encourage public private participation schemes to develop a Film Village and other cultural attractions while Ekiti Airport will be provided with a special section on tourism to drive domestic and international tourism activities. Concessions on existing tourism assets in Ikogosi, Ipole-Iloro and Ero Dams will be optimised.

According to Oyebanji, he also plans to enhance Arts and Culture sector by developing  strategic partnership to grow Ekiti State’s tourism  assets while support will be given to young creatives entrepreneurs to grow their skills, including identifying  strategic locations in the state, such as Ero Dam, Ipole-Iloro and Olosunta Hills, for hospitality development.

In Governance, Oyebanji’s goal is to focus on the 30-year development plan guided by the United Nations Sustainable Development Goals. His plans to achieve this include designing a sustainable programme to clear all outstanding salary and pension obligations and ensure full compliance with the contributory pension scheme policy and improving the working environment of the civil service, including the renovation of the state secretariat, to include provision of broadband connectivity.

He is also to enhance security across the state by providing logistic and equipment supports to the security agencies and deepen use of CCTV and drone surveillance for security and achieve synergy across various security agencies, including recruitment of more officers into the Amotekun Corps, to complement  the existing security agencies.

The new governor in his planning and development agenda will prioritise implementation of the 30-year development plan and ensure policies and budgets are aligned with the plan while also deepening collaboration with the Federal Government and development partners in support of Ekiti State to achieve the sustainable Development Goals and targets.

In the June 18, 2022 governorship election that followed, Ekiti people were convinced that Oyebanji, who has climbed to their hearts and having never failed in integrity test,  deserved their support. They  gave him a resounding victory, polling 187, 057 landslide votes to defeat his closest rival, Segun Oni, who scored 82, 311 votes in the victory that sent Ekiti people into wild jubilation amid drumming and dancing.

The soapbox rhetoric is over for Oyebanji after collecting his Certificate of Return at INEC office, Ado-Ekiti, today  June 22, 2022. Now is the beginning of the scheme to execute the much-needed interminable voyage to the Promised Land that has been elusive since 2003. Fayemi is the incubator of that dream and history. Oyebanji is the child of destiny that will bear the tabernacle of the sacrament of continuity agenda for sustainable development and progress for Ekiti people.

It is a new dawn in the state’s development process that must be jealously guided to avoid the pitfalls of the past that fated succession schemes to the devouring tongue of sphinx. Ekiti State must remain firm in the loop of growth and development to maintain her sovereign sway in the league of developed societies.