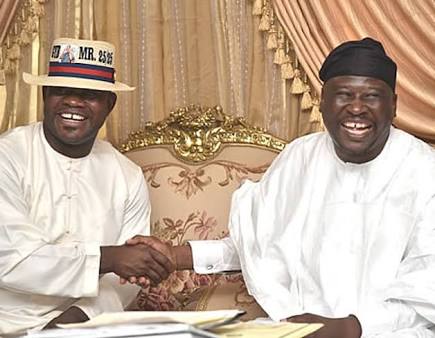 Gov. Ahmadu Fintiri of Adamawa State has commended his counterpart in Kogi, Gov. Yahaya Bello, and the security agencies for their support towards the conduct of PDP primary election in Kogi.

Fintiri, who doubles as the Chairman of the PDP Electoral Committee for Kogi governorship election, gave the commendation when Gov. Bello led heads of security agencies in the state on a courtesy visit to him in a hotel in Lokoja, over the shooting incident that occurred at PDP primary at Confluence Stadium on Wednesday.

Fintiri said that he had enjoyed tremendous support from Gov. Bello and security agencies since he arrived with his team in Kogi State for the exercise.

He noted that the exercise was almost completed when the sad incident occurred, adding that eight out of the 10 ballot boxes were already counted remaining only two.

Fintiri expressed worry that there might be some form of conspiracy within the PDP, which may have led to the cause of the incidence.

“Our arrangement was to start the process at 7 am but delegates were not coming forward for accreditation and even aspirants arrived venue late.

”We did accreditation till about 4-5 pm. And again, the shooting came through part of the stadium where the floodlight went off.

”When I arrived on Monday evening, I went to the venue, inspected everything including the floodlights and were in good condition.

”The floodlight went off while sorting was going on and before you know it, gunshots started coming from that angle”, Fintiri said.

Earlier, Gov. Bello told his Adamawa counterparts that he led some heads of security agencies in the state to come to his hotel to greet him over the unfortunate incident that took place at the PDP primaries’ venue early hour on Wednesday.

Gov. Bello condemned the incidence in a strong term, stressing that what happened at the PDP party primaries did not reflect the character of the good people of Kogi State, and urged the opposition party to put themselves together to complete the exercise.

Bello affirmed that a marching order had been given to security agencies after an extensive meeting to fish-out the perpetrators of the dastardly act.

DR. UCHECHUKWU SAMPSON OGAH ASSURES NIGERIAN MINERS OF HIS MINISTRY’S COORPORATION AND ENJOINS THEM TO TAKE MINING AS A COMPETITION
Fayemi felicitates with Boss Mustapha on his 63rd Birthday