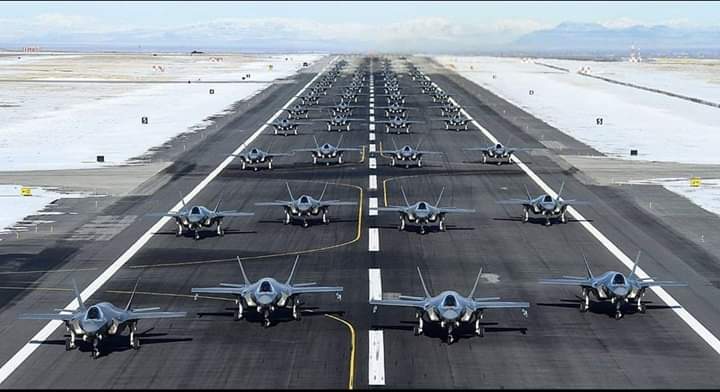 The US Air Force has today launched more than 50 fully-armed Lightning II stealth fighters in a single wave.

The exercise carried out by the active duty 388th and Reserve 419th Fighter Wings displayed the Air Force’s huge strength and sends a warning to Iran.

The U.S. Air Force has performed a huge show of strength by launching more than 50 fully-armed Lightning II stealth fighters in a single wave following an elephant walk down the runway.

The 52 F-35A aircrafts, which are worth a whopping $4.2 billion, took off in quick succession from the Hill Air Force Base in Utah on Monday.

As tensions grow with Iran, the Pentagon sent six B-52 strategic bombers to Diego Garcia, a British-controlled island in the Indian Ocean, CNN reported Monday.

The military base will have the B-52s available for operations against Iran if needed.

According to the US Air Force, a B52 can drop bombs on anything in an 8,800 mile radius (4,480 miles if it is to return to base) of its airbase but can be refueled mid-air, meaning that it can keep going for as long as its 5-strong staff can.