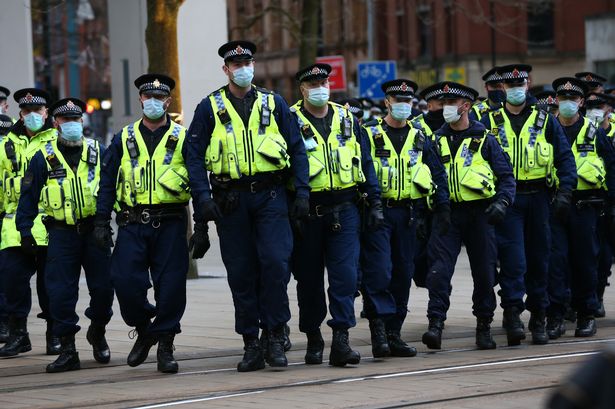 Andy Burnham has demanded a ‘full explanation’ from Greater Manchester Police over the arrest of a protester that left her exposed in her underwear.

Eighteen people were arrested in total during a ‘Kill the Bill’ demonstration in the city centre on Saturday evening.

Police had allowed protesters to march in a large group and give speeches denouncing the government’s new legislation that critics say would restrict the right to protest.

But riot cops moved in when a small group sat down and blocked tram lines in St Peter’s Square.

Campaigners complained that officers used heavy-handed tactics, pushing and dragging people out of the area.

And images of the arrest of a young woman have provoked particular outrage on social media.

It appeared that as the woman was dragged away, her jeans were pulled down leaving her exposed in just her underwear.

An officer made attempts to pull her jeans back up, but not before the scene was captured by a number of photographers.

One image of the incident has been shared on Twitter by a user who accuses GMP of having ‘stripped’ the woman publicly.

The Mayor Andy Burnham was tagged in the photo by another Twitter user called Mike who asked: “I do hope you’ll be doing something about this Andy.”

Tonight the Mayor replied: “I am Mike. I have started by asking Greater Manchester Police to provide a full explanation of what happened.”

In a statement issued earlier on Monday, GMP said six of those arrested were released under investigation, six were handed fixed penalty notices and five others accepted cautions.

A boy of 17 ‘is being dealt with by the youth offending service’.

Police have since defended their decision to break up the protesters, after claims that the group refused to comply with instructions asking them to move away from the area.

Their response was backed by the Mayor of Greater Manchester, Andy Burnham and his deputy Bev Hughes.

“GMP had to manage a challenging situation carefully and we did not see a repeat of scenes seen in other parts of the country recently,” they said in a statement.

It comes after protesters in Bristol on Friday became involved in violent clashes with police after a similar ‘Kill the Bill’ protest.Protestors block the tram tracks in Piccadilly Gardens(Image: Adam Vaughan)

Saturday’s protest against the new policing bill, began at St Peter’s Square and had remained ‘largely peaceful’ and ‘contained’ according to GMP.

Naheela Ashraf, co-chair of Stand up to Racism Manchester, said the atmosphere had been ‘fantastic’ and confirmed many protesters were wearing masks and that social distancing was maintained.

Around 150 demonstrators marched through to Piccadilly Gardens, before arriving at Stevenson Square. As they walked chants of ‘kill the bill’ and ‘our streets’ could be heard.

The group returned to St Peter’s Square by late afternoon, with the protest having passed without any trouble or police intervention by thatstage.Some people said they believed the police’s response was ‘intimidating’ and ‘unnecessary.’(Image: Adam Vaughan)

As the majority of protesters began to disperse, a very small group of people made their way on to the tram tracks.

“From what I understand, a very small group continued to march around the city and sat down in St Peter’s Square which wasn’t part of the original protest,” Naheela said.

GMP said the group were repeatedly asked to move by officers, and partners from TfGM, but some failed to comply with this order.

“In all events, we have used the four Es approach, with a particular emphasis on engagement, to work our way through the challenges presented to us,” a spokesperson for the force said.

“Where this has been exhausted without success, we have moved to enforcement action where necessary.

“We continually prioritise the assessment of risk, the disruption caused, and importantly the safety of the wider public throughout.”