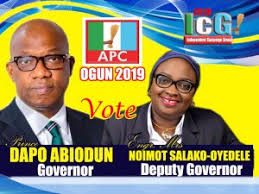 The former Deputy Speaker and two-term member of Ogun State House of Assembly, Rt. Honourable Remmy Hazzan, has been named as the Spokesman to the governorship candidate of the All Progressives Congress (APC), Prince Dapo Abiodun.

In a statement issued on Sunday by the Publicity Secretary of the APC Caretaker Committee in Ogun State, Hon. Tunde Oladunjoye said that Rt. Honourable Remmy Hazzan’s appointment was based on his “political experience, accomplishments and unique selling points.”

The Statement reads: “As the Dapo Abiodun campaign machine roars, we wish to inform the members of the fourth estate of the realm in particular, and the public in general that the former Deputy Speaker and two-term member of the Ogun State House of Assembly, and a certified international arbitrator, Rt. Honourable Remmy Hazzan, has been appointed as the Spokesman to our Governorship Candidate, Price Dapo Abiodun”.

“Remmy Hazzan contested and won the Odogbolu Constituency seat of the Ogun State House of Assembly and later went on to become the Deputy Speaker in 2007. He was re-elected into the same Assembly in 2011 and emerged the Chairman, Parliamentary Caucus of the House. Among several awards and certificates of honour, he was awarded the Martin Luther King medal of Emerging Black Democrat by A.D. King/Martin Luther King Foundation in Atlanta Georgia, USA in November, 2012”.

“A fellow of the Chartered Institute of Arbitrators, London, Hazzan has spoken in many conferences at home and abroad, and has undertaken successful international arbitration assignments. He has been a Pastor with the Redeem Christian Church of God (RCCG), since year 2000.

While accepting the appointment, Pastor Hazzan posited that: “At a time like this, our state needs all men of immense influence to bring sanity to the seeming confusion in the political space. I am here to add value. I graciously accept this call to service to our party, the APC and our dear state, Ogun State,” the statement concluded.

SECOND-TERM DENIAL: AMBODE TO MISS OUT ON ABUJA MANSION
Ekiti State Governor approves appointment of prominent citizens of the state to serve on the boards of Odu’a…..