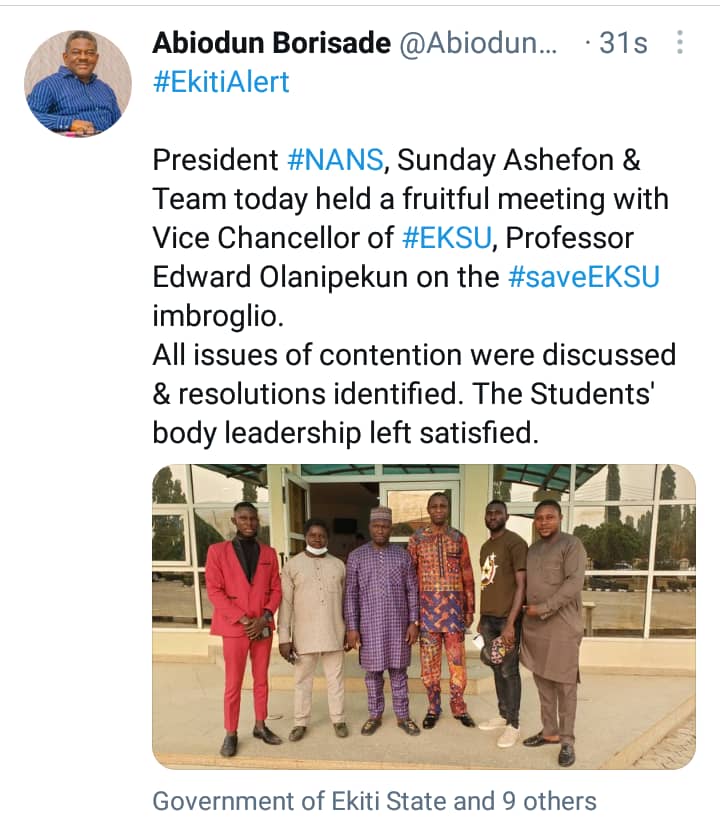 The leadership of the National Association of Nigerian Students NANS Ekiti State chapter has given an assurance that no student of the Ekiti State University will be victimized following the out cry over some irregularities in the institution.

Some students of the institution had earlier taken to the social media with the #saveEKSU where they alleged the institution of engaging in activities inimical to academic environment such as missing script, portal irregularities, result racketeering among others.

Addressing newsmen after a meeting with the management of the university, the NANS chairman in Ekiti State, Mr. Abiola Ogunleye appealed to the students to remain calm and sit for the examination scheduled for Monday so as to enable them move to the next level.

Ogunleye said ” We want students to stay focused and write their exam to be able to graduate to the next level.

“The management of the University under the leadership of professor Eddy Olanipekun is taking bold steps to address the concern of the students.

“No student should entertain any fear as the university management is preventing any students from being victimized. The National Association of Nigerian Students is on guard to make sure that no student is made to be a victim of academic recklessness.

“The leadership of NANS has been assured by the university that result of 2019 graduating students would be considered by the senate to enable them proceed for the NYSC.

Mr. Ogunleye also affirmed that all the staff of the institution involved in the irregularities would be punished if found guilty.

However the NANS chairman confirmed that the homegrown portal has been working perfectly well as against the speculations saying only those who have not paid their school fees were unable to access the portal.