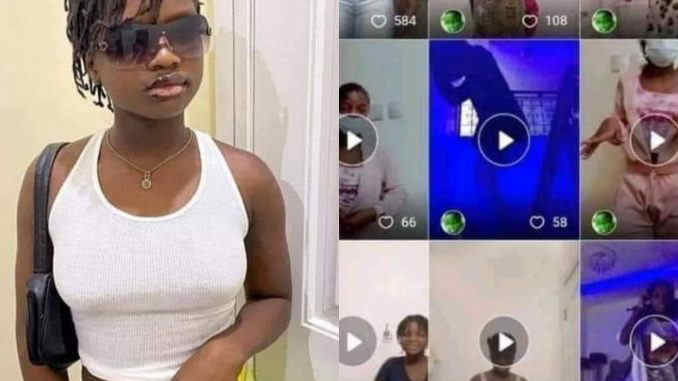 The Chrisland School female student at the centre of a viral sex tape, allegedly has an online profile named “Bhadgurl4k” where she makes sensual posts.

The ten-year-old girl was seen in a viral video yesterday engaging in sexual acts with some of her classmates.

Her mother claimed she was gang-raped, and after the students returned from a sporting event in Dubai, UAE, the school tried to cover up the issue.

But the school suspended the girl, insisting that she engaged in immoral behaviour, which has since been corroborated by the existence of the sex tape.

The child uses an app called Likee to share her self-recorded video clips.

Her handle is called “bhadgurl4k (bad girl fuck)”, and her page already has over 24,000 likes.

“Madness and cringe” is the title of her page. With seductive gestures, she tries to show off her dance talents.

Surprisingly, investigations have shown that the tapes were shot at her home.

The Lagos state government has closed the highbrow school as a result of the uproar caused by the sex tape.

ISAIAH OLUGOSI FOUND DEAD IN LONDON JAIL WHILE WAITING SENTENCE. ‘INVOLVED IN £500,000 SCAM’ ALSO TRAFFICKED GIRLS ACROSS THE UK
The sex in my office was consensual and was initiated by Hannah- Prof accused of raping student says