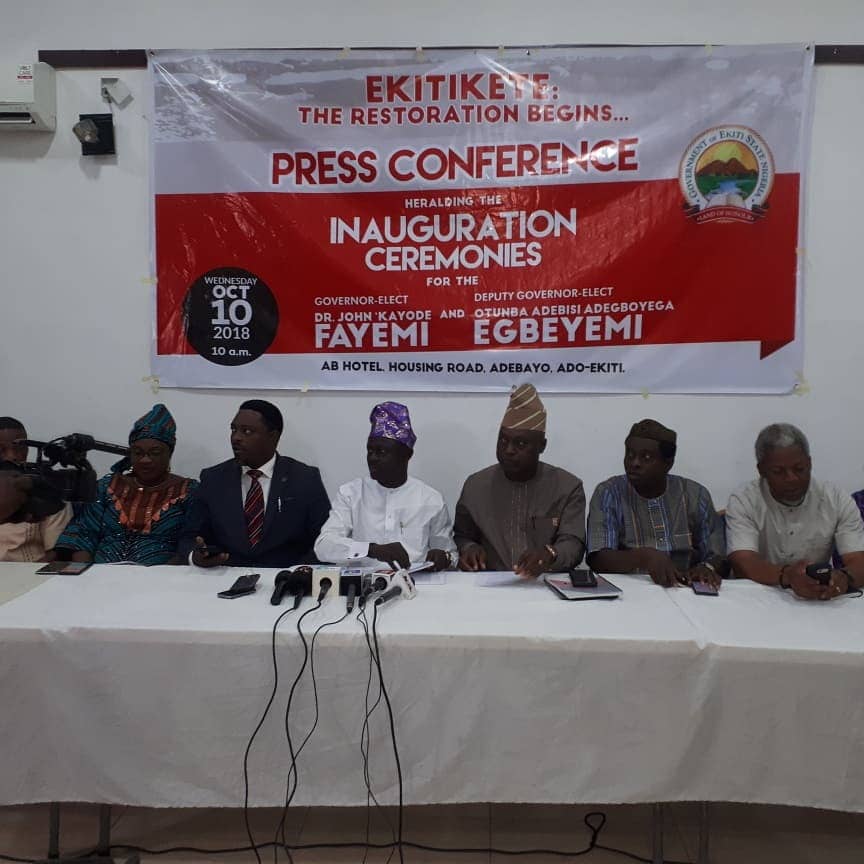 Text Of A Press Conference On The Inauguration Ceremonies For Dr John Kayode Fayemi As The Sixth Elected Governor Of Ekiti State Held On Wednesday October 10, 2018 At AB Hotel, Ado-Ekiti

Protocols
Gentlemen and ladies of the press. You are welcome to this press conference heralding the inauguration activities marking the assumption of office by the winner of the July 14, 2018 governorship election, Dr John Kayode Fayemi, who was candidate of the All Progressives Congress (APC) in that election.
This event is significant because it marks the beginning of the new order in the reclaiming of Ekiti land and restoring her values. It is also significant in calling attention to the transformation that will emerge from Fayemi’s administration that will take effect from October 16, 2018 .
As noted in Dr Fayemi’s speeches before, during and after the election, the task of curbing the drift to squalor and abject poverty to which Ekiti State was subjected must be embraced by all men of vision, integrity and good will. They must move away from their comfort zones to the rescue of Ekiti people, who were being made to live with poverty as a way of life.
Of course the Governor-elect knew that this is a daunting task. But then Dr Fayemi knows that the Ekiti conundrum is not an insurmountable challenge. Ekiti people themselves knew and still know that the outgoing administration holds no promise for them in their thirst for prosperity.
It is against this background and, motivated by his place in history at a critical time in the rescue of Ekiti people that Fayemi traversed the 132 towns and villages in Ekiti State to sell his campaign promises to the people that there was hope in the reclaiming of Ekiti land and restoration of its values and dignity to reshape their collective destiny for good again.
Of course, Fayemi had no problem convincing the people in all the communities he visited, for in any of those communities, he could point to a minimum of four projects executed while he was governor between 2010 and 2014.
It is therefore not surprising that Ekiti people, desirous to save themselves from misrule went to the polls on July 14, 2018 and voted for a man they believe could make a fundamental change in their lives. July 14, 2018 governorship election was therefore a vote for freedom, progress and growth by Ekiti people.
It would be a new dawn on October 16th as Dr Fayemi will be back on track to take the government back to the people again for accountable government that will also make Ekiti people active participants in the way they are governed.
This knack for institutionalisation of participatory governance by Fayemi has reflected in the stakeholders forum commissioned by him where Ekiti people spoke in conference on their expectations from the government.
To enable Fayemi explore the pool of ideas that would be generated at the stakeholders summit, the new administration decided to rally and mobilise critical stakeholders, including professionals and other strata of the society, to brainstorm on the development plan, using both formal and informal strategies in mobilising human and material resources to achieve the objective of rescuing Ekiti State again.
Now the journey for the actualisation of Ekiti dreams starts on October 16, 2018; the date fate has chosen for Ekiti State to recover her destiny and turn around her fortune.
Suffice to say that this kind of historic and historical occasion held to celebrate the freedom of a people cannot go without pomp and drums with dignitaries in attendance to join in the celebration.
Expected to grace the occasion on October 16, 2018 is President Muhammadu Buhari, the Commander-In-Chief of the Nigerian Armed Forces, who will be the Special Guest of honour at the occasion.
He will lead top dignitaries, including state governors, ministers, military and paramilitary top leaders, party leaders, members of the diplomatic corps, clergy, civil society groups, artisans, market women and the general public, to celebrate the day with Ekiti people.
Activities outlined as part of the inauguration ceremony of the new governor are as follows:
• Inauguration Lecture/Book Presentation/Photo Exhibition and Award of prizes to winners of the JKF Inauguration Essay Competition on Monday October 15, in Ado-Ekiti, the state capital. The title of the essay competition is “Reclaiming Our land, restoring or values: My Ekiti Dream”.
The Guest Lecturer is Prof Niyi Osundare.
• On October 16, the new governor and his deputy will be sworn in by the Chief judge of Ekiti State at the Ekitiparapo Pavilion along new Iyin Road, Ado-Ekiti. Reception takes place at the same venue after the swearing in ceremony.
• On Wednesday October 17, there will be Town Hall meeting in Ekiti North Senatorial District holding at Odo Udo Primary School grounds, Ojido Road, Ido-Ekiti in the morning, while on same day, Ekiti South Senatorial Town Hall meeting holds at Ereja Park (round-about) in the afternoon.
• An inter-faith thanksgiving service holds in the morning of Thursday October 18 in Ado-Ekiti, to be followed by Ekiti Central Senatorial District Town Hall meeting in the afternoon at Aramoko Motor Park, Aramoko-Ekiti.
• On October Friday 19, the thanksgiving Jumat Service holds at the Central Mosque, Ado-Ekiti,
• On Saturday October 20, Ekiti Arts, Culture and Talent Fair holds at Ekitiparapo Pavilion along New Iyin Road, Ado-Ekiti.
• Thanksgiving service holds on Sunday, October 21, at St Patrick’s Catholic Cathedral Church, Old Motor Park, Ado-Ekiti, while a civic reception will take place at the Eyitayo Lodge, Isan-Ekiti country home of the new governor.
Gentlemen and ladies of the press, as partners in progress in representative governance, it is expected that you will live up to the standard of your noble roles as information managers in all these events as part of your contributions to the success of the inauguration ceremony.
Through features, interviews and routine reporting, your role as the fourth estate of the realm is expected in the moderation of all the activities marking the inauguration of the new governor in highly professional manner as part of your contribution to the growth of democracy in Nigeria.
Thank you and God bless.