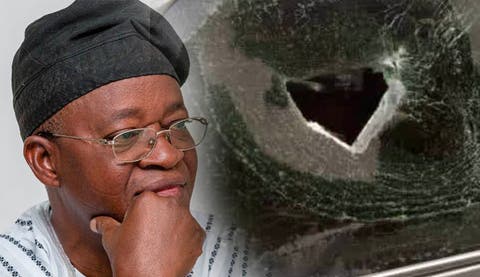 Osun State Governor, Adegboyega Oyetola, has alleged that those who attacked him on Saturday in Osogbo, Osun State capital made attempts to assassinate him and some of his political aides.

The Governor who made this known during a statewide broadcast on Sunday morning, explained that his attackers were not the genuine youths who were protesting under the aegis of #EndSARS.

The Governor who claimed to have joined the protest from Okefia and walked to Olaiya junction, where he addressed the peaceful protesters before the process was hijacked by hoodlums.

About the lives lost yesterday, Oyetola said it happened in circumstances that are not in any way linked to the his visit to the protest ground, as his security personnel did not fire live ammunition or teargas at the protesters.

Specifically, the Governor said his attackers were “identified political thugs”.

In an earlier statement, his press secretary, Ismail Omipidan had said, “First death happened in a motorcycle accident prior to the arrival of the Governor at the protest ground. His arrival time was 2:35pm. The LAUTECH hospital confirmed receiving the victim who eventually died at 12:30pm -2hrs earlier.