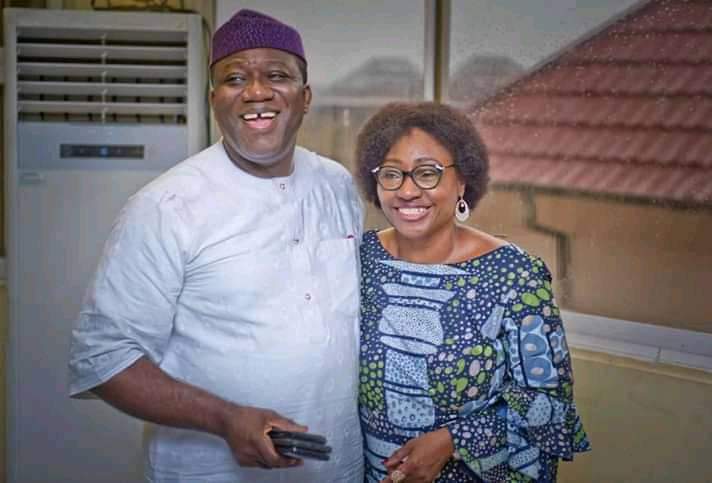 Created out of the old Ondo State in October, 1996 alongside five
others by the then Federal Military Government, Ekiti State remains
one of the 36 states of the Federation that constitute the entity
called Nigeria.
Ekiti State is reputed to produce the highest number of Professors in
the whole of Africa who have made global marks and become pioneers in
their chosen academic careers. Personalities such as Professors
Adegoke Olubunmo, who became the first Nigerian Professor of
Mathematics; Adeyinka Adeyemi, the first Professor of Architecture in
West Africa; J.F Ade Ajayi, Niyi Osundare, Bolaji Aluko, Peter
Bodunrin, late Sam Aluko, B.O. Osuntokun and numerous others who are
too numerous to mention have distinguished themselves as proud
indigenes of the State and have all held sway in the academics.
When Dr. Kayode Fayemi was first elected into office in 2010, he tried
everything humanly possible to effect some positive changes in our
orientation and consciousness which regime continuity could not allow
bringing to logical conclusion.
Unfortunately, before Fayemi assumed office last year, thousands of
families across the state were already living below the poverty line.
The much cherished education was almost on its knees. Youth
restiveness bring about by the astronomical rise in the unemployment
figure, coupled with selfish and gluttonous corruption masquerading
itself as governance was with us. There was absolute degradation of
the land’s value system.
Workers and pensioners were owed several billions of arrears of
gratuities and pension for a very first time, the cultural heritage
and beliefs of Ekiti people were greatly devalued and these values
degenerated so severely that outsiders began to wonder what went wrong
with us as a people and to even make the matter worse, the State
Command of the National Drug Law Enforcement Agency (NDLEA) declared
Ekiti State a leading producer of Indian hemp in Africa.
With all these, the implication is very clear. We all have a joint
responsibility to cooperatively go out to recover these lost values.
There is no gainsaying the fact that before the emergence of the
current Kayode Fayemi-led administration, Ekiti State was already
loosing fast her integrity and respect in the committee of states as
the state became famous in election malpractices such as high-tech
rigging, votes buying, ballot box snatching and several other
electoral malpractices in that class. Ekiti State suddenly became
renowned as ‘one day, one trouble’ state as violence of all sorts
became the order of the day.
Truth was no longer respected; justice, peace and lack of respect for
individuals, particularly the elders and Royal Fathers were no
longer fashionable.

To ensure that these lost and much cherished societal values return to
the land, individuals and corporate organizations are expected to
partner and support the JKF administration in its bid to return the
value system to normal which would further guarantee a better, decent
and respected society.
Societal orientation programmes aimed at facilitating the restoration
of the system should be introduced by the administration.
Our highly respected traditional rulers, religious and community
leaders should embrace and encourage immediate return of these values
for the benefit of all.
All Ekiti persons, regardless of where they reside, should be prepared
to effect necessary changes in their attitude for the general good of
the state.
All Youth should not only be encouraged to respect their elders and
leaders, they should also be discouraged from engaging in social vices
such as drug abuse, armed banditry, armed robbery and several others
in the class.
No wonder, the state Governor, on assumption of office called for the
revival of our value system. This has undoubtedly demonstrated his
genuine concern and commitment to value renaissance in the state. Dr.
Fayemi did not only return the State’s ‘Fountain of Knowledge’
cognomen to ‘Land of Honour’ to re-awaken the consciousness of the
people, he also changed the name of the ‘Civic Orientation’ Department
of the State Ministry of Information to ‘Values Orientation’. The
title of the Ministry will now read Ministry of Information, Tourism
and Values Orientation.
All hands must now be cooperatively placed on deck to return Ekiti
state to its cultural track for it to be respected in the committee of
states. Every Ekiti person will have to make contributions to make
this realizable.