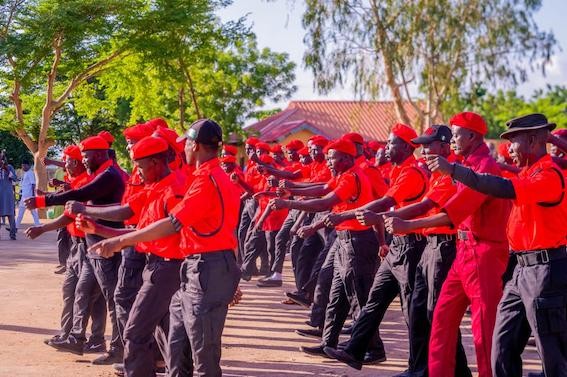 Zamfara is moving ahead with its internal security arrangement, after the failure of the Nigeria Police and the army to stem the wave of killings and banditry in the state.

Training of the initial 500 guards, recruited from all the 19 emirates in the state has begun.

Governor Bello Matawalle flagged off the training on Saturday in Gusau.

An emblem on the red uniform of the guards, reads: Civilian JTF Zamfara State.

Matawalle said Zamfara State under his watch is now moving towards implementing new security measures. He said last week that the guards will bear arms.

He said the decision to establish Community Protection Guards was informed by his administration’s desire to work out all possible options to deal with the increasing act of banditry causing loss of lives, untold hardships and rupturing inter-communal peace in some parts of the state.

To the Community Protection Guards, Governor Bello Matawalle informed them of the task ahead of them, and urged them to concentrate fully on their training.

Matawalle added that at the end of the training, the CPG members will be deployed to their various communities in the 19 Emirate Councils of the state to energetically complement the security forces in the fight against banditry and sundry crimes.

The Commissioner of Police, Zamfara State Police Command, CP Ayuba Elkana said the training of the Community Protection Guards was part of series of measures taken by Governor Bello Matawalle in order prevent the state from all forms of crimes.

Elkana while expressing the command’s full support to Governor Matawalle in the fight against banditry, urged the recruits to always be law abiding, God- fearing and objective in the discharge of their duties in order to achieve the desired goals.

Commissioner of Security and Home Affairs, Rtd DIG Mamman Ibrahim Tsafe said the establishment of the Community Protection Guards was aimed to assist the security agencies in securing the state from all heinous crimes in all parts of the state.

The occasion was attended by the Speaker, Zamfara State House of Assembly, Nasiru Muazu Magarya and Secretary to the State Government Alhaji Kabiru Balarabe.